Schools get support from town 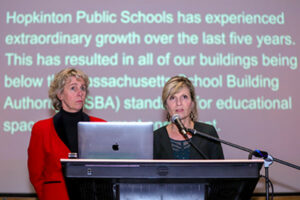 The Hopkinton Public Schools are one step closer to increasing the number of classrooms in three of their buildings after four warrants were approved at the Dec. 9 Special Town Meeting.

The warrants, which listed expenses totaling $10 million, were approved resoundingly by residents after a presentation by superintendent Dr. Carol Cavanaugh and director of finance and operations Susan Rothermich.

With the steady increase in enrollment over the past few years, an increase that is projected to continue for the foreseeable future, lack of classroom space has become a major issue for the district.

“I am sure it comes to no one’s surprise that Hopkinton has seen extraordinary growth over the last five years,” Cavanaugh said. “We have reached the point where we are going to need additional classrooms in several of our schools to ensure that children have places to learn.”

Articles 2 and 3 asked for the immediate funding of $500,000 for a design and engineering study to be done prior to the end of this school year for six additional built-out permanent classrooms at Hopkinton High School and $4,500,000 for the actual construction work. The $500,000 for the study will come from the School Department Stabilization Fund and from the Legacy Farm host community agreement, according to the Appropriations Committee. Funding for the construction work would be a debt exclusion.

Cavanaugh cautioned, however, that the purpose of building these six classrooms at the high school was just for current space needs, not for future growth. 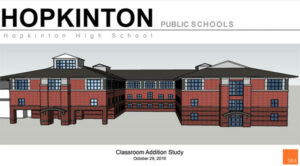 The temporary plan for the high school is to add six classrooms to the rear of the building.

The classrooms will be built at the back of the building onto a wing that can be built out to accommodate the new classrooms. Cavanaugh also assured the community that these six classrooms will be used for the duration of the high school even if a 10-year capital building plan moved forward.

Article 4 asked for four modular stacked classrooms at the Elmwood Elementary School for an estimated $2 million.

“These four classrooms will get us through the next five years,” said Cavanaugh, who reminded the townspeople that there is a statement of interest into the Massachusetts School Building Authority for a larger renovation or new building project.

Rothermich explained the difference in costs between the two installations. At Elmwood, the connection to the building would be a simple walkway with an interior staircase within the modular classroom. At Hopkins they will be integrating right into the first and second story, so workers would be breaking into the building on each story.

Rothermich noted that the figures are estimates, and the actual bids could come in lower, which would decrease the impact to the town.

Article 5 passed 304-6 after a brief discussion.

Articles 3, 4 and 5 now move to a ballot vote early next year due to the fact that they would be debt exclusions.

For now, school officials and the School Committee are pleased with the support they received from the taxpayers during the Special Town Meeting.

“[The] ask was not small,” School Committee chair Meena Bharath said the morning after the vote. “With a concerted effort from our administrative team led by Dr. Cavanaugh in establishing what is needed, asking for what is needed, and clearly explaining why it is needed, backed by data, the passing of this article became possible at the Special Town Meeting.”

Bharath said she was “elated” with the outcome, allowing the projects to move forward to a formal vote.

“We have renewed, as a community, even in the most stressful times of growth and change, our commitment to quality education spaces occupied by some of the most important members of our community, our children and teachers,” she said.

Cavanaugh was also thankful for the community’s support for the additional classrooms for Hopkinton High School, Hopkins and Elmwood, as the number of students enrolled in the schools has exceeded the capacity of the space currently available.

“The Town Meeting vote will certainly alleviate many of the capacity strains we are feeling,” she said the day after the vote. “Hopkinton is known for its excellence in education. We want to ensure that we are able to provide the facilities and resources that enable our teachers and students to remain among the highest ranked in the commonwealth.”