The 2020 cross country season presented plenty of challenges for Hopkinton senior Nick Brown. The pandemic resulted in new rules and smaller practices, and his season began with an injury that kept him out of the Hillers’ first dual meet.

But the Bates College-bound distance runner bounced back to earn victories in each of his four dual meets, and he finished the season with a top-20 finish at the Massachusetts State Track Coaches Association meet at the end of the year.

He was named the MVP of the “pod” in which Hopkinton competed, a group of geographically proximate towns put together to allow for less travel during the COVID-19 pandemic.

“The cross country season was pretty good, all things considered,” Brown said. “We were lucky, a lot of towns went into the red [high numbers of COVID-19 cases] and had to cut their season short.” 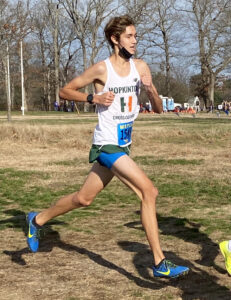 Nick Brown made the best of the Hillers’ modified cross country season, earning MVP honors for the Tri-Valley League “pod” in which his team competed.

Brown finished 16th among Division 1 runners at the MTSCA Cup in Attleboro and 20th overall. His 5K time of 16 minutes, 35 seconds was a personal best.

“They were able to pull it off in a way that was safe, but we also had some good competition and everyone was able to throw down some good times,” he said.

Dealing with sport-specific guidance implemented during the pandemic was harder to get used to in practices, Brown said, because the team had been used to running in packs and congregating as a group. During races, competitors were sent off in waves and masks were required unless athletes were able to get some distance between them and the nearest fellow runner.

“I think generally it’s harder to push myself when I don’t have other people running my pace,” Brown said. “In the last race, I had a good pack of kids that were pushing me along.”

The final race will provide a springboard for Brown as he enters the winter and spring track seasons. He once again will be running the mile and 2-mile and said the competition figures to be even stronger than during the cross country season. Brown said his goal is to continue to lower his personal best times as he finishes his high school running career and transitions to competing at the collegiate level at Bates.

“Overall, I am just excited to get out there and compete,” he said.

Brown learned that he had been accepted to Bates in December. He will join his brother, Alex, as a college runner after matching his accomplishment as a league MVP. The elder Brown earned league accolades multiple times before beginning his running career at Boston University last year.

Nick chose Bates because of the coaches as well as the strong, liberal arts educational opportunities at the school in Lewiston, Maine.

“I wanted a little bit of breathing room and I like the Vermont/New Hampshire/Maine area,” he said. “I really like the coach there and the campus and the vibe of the community.”

The school also rates high in history and education, fields Brown plans to pursue with the possible goal of being a history teacher.

As he has navigated an unusual end to his high school career and the college search process, Brown said the backing of his brother and his parents, Lisa and Ken, has been instrumental.

“My mom, dad and brother have always supported my goals of trying to run in college,” Brown said. “I am lucky to have such a supportive family.”