Brown Dog Coalition to the rescue 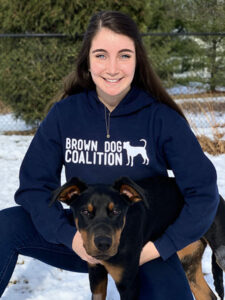 Brown Dog Coalition co-founder Annie Covino poses with Maverick, one of the dogs the Hopkinton organization has helped rescue.

Eight-month-old Maverick bounds into the room, greeting a visitor with kisses before jumping on a sofa to settle in, appearing to listen eagerly to the conversation.

The energy of the mixed-breed dog, who will reach about 60 pounds at maturity, is contagious.

Maverick was 6 weeks old when his owners in Alabama took him to a veterinarian to have his tail removed, a procedure discouraged by the American Veterinary Association.

During the examination, the veterinarian determined that Maverick, who had been living outside, had serious leg injuries that had become infected. He also was anemic.

The owners, unwilling to pay for his care, surrendered him to the vet.

The vet then placed a call to an organization some 1,200 miles away — the Brown Dog Coalition in Hopkinton.

The coalition is based out of a home on a quiet street in Hopkinton, a long way from the bustling shelters of Florence, Alabama. But animal supporters in both communities have forged a connection that has helped more than 1,000 animals find a new home.

The coalition was founded by Hopkinton residents Annie Covino and her mother, Naomi Covino. The two had always loved animals and had volunteered at animal shelters when they decided to form an organization of their own, which they founded in June 2016.

They named their organization Brown Dog Coalition in honor of a family dog. But their work is not limited to one type of dog, explained Annie, a 24-year-old who graduated from Boston University in 2017.

They started by rescuing a mother dog and her eight puppies. They have since worked with a range of dogs, “from teeny, tiny dogs to great big dogs,” Annie said.

Their rescue organization does not have a brick-and-mortar shelter. Instead, Brown Dog Coalition works with foster families, both in Alabama and Massachusetts, to care for the animals it rescues until permanent homes can be found.

Annie and Naomi decided to work with the shelter in Alabama when they visited and saw “stray dogs everywhere,” Annie said. At the municipal shelter there, “people would bring in bundles of kittens and puppies.”

The subsequent overcrowding made the animals subject to possible euthanasia if they were not adopted in time or if space was unavailable. Finding them new homes was “the only hope for dogs in that community,” Annie said.

Shelter staff in Alabama have done a “really good job” of significantly lowering euthanasia numbers, Annie said. Reaching out to organizations such as Brown Dog Coalition is one way the picture for these animals has brightened.

Working with an intake team in Alabama, the coalition identifies animals that are friendly and adoptable, of all breeds, colors and energy levels. They bring about 10-15 dogs and the same number of cats up North each month.

After being transported to Massachusetts, the animals are placed with foster families until they can be matched up with a permanent home. The coalition features adoptable animals on its website (browndogcoalition.com) and works with other animal-related sites such as Petfinder.com to showcase them. It also host regularly adoption events.

More than a third of the animals the group works with have extensive medical issues, such as amputations, leg surgeries and treatment for such conditions as heart worm, parvovirus and mange.

In the case of Maverick, he stayed with a Brown Dog Coalition foster family in Alabama while he was treated for his infection. When the infection did not clear, he was transported to Hopkinton, where he received care from a veterinary specialist who cleaned out his wounds, removed damaged sections of his leg and put him on antibiotics.

He is now healing, and the Covinos are hopeful his damaged leg will be able to be saved.

In addition to bringing animals north for adoption, Brown Dog Coalition also supports spay/neuter education and programs at the shelter in Alabama.

Spaying and neutering animals lowers the animal population and “helps shelters from getting full so we don’t have to clear the shelters all the time,” Annie said.

For the Covino family, which includes Annie’s father and Naomi’s husband, Dave, who they described as a “renaissance man” who provides support to them in a variety of ways, the work they do helps both the animals they rescue and the people who adopt an animal who often becomes their best friend.

“I love doing this,” Naomi said.

Animals offer “pure love,” she added. “To give that to people is so rewarding. It makes the dog happy, and it makes people happy.”