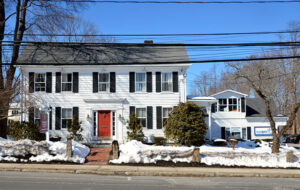 The owner of the Aaron and Lucy Claflin home at 76 Main St. continues to examine legal possibilities after Town Meeting voters designated the property as a historic district, thwarting his plans to demolish the structure and build a mixed-use building with a restaurant, shops and apartments.

“At this point, we’re looking at our legal options,” said Paul Mastroianni, who owns the property. The Town Meeting vote was a “complete violation of my property rights,” he added.

Mastroianni had presented plans to the Planning Board to demolish the home and create a mixed-use building. The Historic Commission stepped in to designate the building as a historic district, which prevents the building from being demolished.

In its report explaining why the building should be designated a historical district, members of the commission described the property as a late 18th century or early 19th century Federal style home, which was later updated with Greek Revival and Italianate details.

“The house is one of the few remaining early buildings at Hopkinton Center, and retains a high degree of integrity,” commission members wrote in the report. “The house is part of a cluster of historic buildings that has previously been recommended for local historic district designation.”

Mastroianni countered that the building was “never a historic structure.”

He said the designation was made “just to thwart any future development, which the Town of Hopkinton desperately needs.”

The move is “unprecedented,” he said.

He said the building is vacant and is in “very very very bad shape.”

“It’s going to end up being an eyesore for the Town of Hopkinton,” he said. “It’s going to sit there in disarray. There’s absolutely no reason for what happened.”

The building has no heat, he said, and is “rotting from the inside,” while the exterior “needs a lot of work.”

He said he has received no interest from prospective renters. He purchased the building for $783,000, according to published reports.

Berkshire Hathaway had been renting the building, but the real estate company moved its offices up Main Street earlier this year.

Mastroianni expressed his disappointment with the Town Meeting decision and contacted the attorney general’s office, calling it “spot zoning.”

The attorney general’s office responded that the town was within its rights to create the district, according to previous reports.

Town Manager Norman Khumalo said that Town Meeting voters have the “ultimate say” on zoning issues such as this one.

Based on the May vote, “the developer would have to comply with zoning district” requirements, he said.