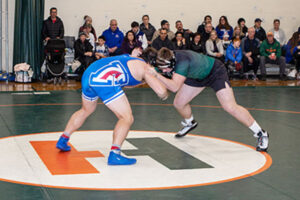 Coming into the season without a single senior on the roster, Hopkinton High School wrestling coach Tim Nelson was not sure what to expect from his team. But led by four junior captains, the Hillers have forged a winning record and, Nelson hopes, set themselves up to bring a solid contingent to the state tournament this winter and compete for a Tri-Valley League title next year.

“We are trending in the right direction and it’s been better than I expected going in,” Nelson said. “A lot of underclassmen have stepped up.”

Nelson extolled the value of having younger wrestlers get into matches, sometimes taking their lumps but emerging from the experience with more skill and knowledge than they might gain by only practicing or competing at the junior varsity level.

The underclassmen also have been able to look to the example provided by their captains. Mo Zaidi has battled injuries that cost him most of last season and an injured ankle that forced him to miss time this winter. But the captain has come on strong in recent weeks, Nelson said.

“He has been winning a ton of matches and competing with some of the better wrestlers in the state,” the coach said.

Will Tedstone is excelling after jumping up a couple of weight classes last year and struggling at times.

“He knew he needed to get better,” Nelson said, noting that Tedstone spent the most of the offseason wrestling with a club team and rarely took a day off. “He committed to putting in some time and it’s paid off, he has beaten some good wrestlers.”

Jake Sokol finished in the top 10 in the state last season, the Hillers’ most successful returning wrestler. He played football in the fall but also managed to work in significant training time on the mat between club teams. Nelson feels that the junior has the potential to compete for a state title as early as this year.

Hayes Pearson-Woodruff, the final junior captain, is another wrestler to look out for next season. Although Pearson-Woodruff is slightly undersized for the 220-pound weight class, Nelson said some added strength and experience will go a long way to making him very competitive with some of the area’s best wrestlers.

“They are all just great leaders in different ways,” Nelson said of his captains. “They are all good friends and have been for a few years, which helps. They all bring a different dynamic to the team that each and every underclassmen can feed off of.”

One such underclassman who is standing out is Luke Dionne. As a freshman last season he won the majority of his matches at 106 pounds. This year, wrestling at 113, he has put on some muscle and enhanced his technical skill. Nelson said Dionne could be poised for a breakout year during the individual meets.

“The sky is the limit for him going forward,” Nelson said.

Nelson said he hopes to bring five to seven wrestlers to the state tournament this year, a goal he said is achievable. He also wants to put some of the younger wrestlers in position to improve quickly. Having so much talent and youth has been exciting for the coach and the program.

“They are just such a great group of kids to be around,” Nelson said. “It’s been a fun year overall and, since it’s a younger team, it’s good knowing we are going to have everyone coming back.”