Picard, who had served as the bank’s chief operating officer and chief financial officer since 2014, succeeds former CEO and President Joe Coderre, who recently retired after 35 years with the company. Her promotion became effective May 11.

“Rosemary is eager to build upon the past successes of the bank and lead the company into its next chapter,” said Dr. Dewey J. Tiberii, chair of the bank’s board of directors. “Rosemary has a deep respect for our customers and will make the decisions necessary to deliver on the value of our Simply Better brand. Her forward-thinking ideas to improve the bank efficiencies along with providing leading bank customer financial solutions will insure that Savers Bank is among the top leading community banks in Central Massachusetts.” 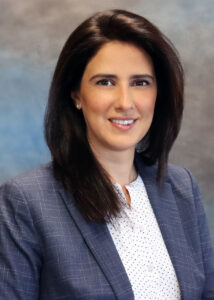 Prior to joining Savers Bank, Picard served as chief financial officer and treasurer for Dean Bank. She has over 20 years of banking experience, including stints with Beneficial Finance & Mortgage and State Street Bank & Trust. She is a certified public accountant and worked as a senior accountant for Piccerelli, Gilstein, & Co, LLP, located in Providence.

Picard graduated with honors from the University of Massachusetts Dartmouth with a Bachelor of Science degree in accounting. She is an active member of the Massachusetts Society of Certified Public Accountants as well as the Boston chapter of the Financial Managers Society.

Gorman Richardson Lewis Architects (GRLA) of Hopkinton announced that SiriDevta Khalsa was promoted to associate/director of finance and joined the firm’s management team. Khalsa had been managing finance at GRLA for the past five years and, according to the company, “has proven herself to be an integral part of GRLA’s overall success.”

The company also recently worked with the Worcester County Food Bank to help with the replacement of the roof at the organization’s Shrewsbury headquarters, converting it from rubber to metal.

“The Worcester County Food Bank delivers over 5,000,000 pounds of food to over 70,000 people in the Worcester County area, so ensuring the integrity of their building and especially the roof is of paramount importance,” GRLA stated.

Milford Regional Medical Center announced the appointment of Matthew C. Martinez, M.D., as the new chair of the Department of Anesthesiology, where he has been a member since 2009.

“Dr. Martinez is that rare find of an incredibly thoughtful and bright physician whose clinical excellence and compassion are universally recognized and respected. He is a natural leader,” stated Leslie G. Selbovitz, M.D., chief medical officer and senior vice president for medical affairs. “We welcome Dr. Martinez to his new role and wish him much success.”