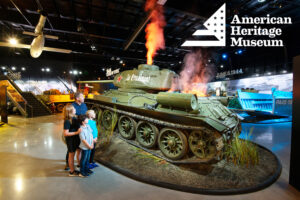 The American Heritage Museum features artifacts that are not displayed anywhere else in North America.

“There’s a well-known saying that I use over and over again: Those who forget history are condemned to repeat it,” says Hunter Chaney, director of marketing and communications for the Collings Foundation and American Heritage Museum.

“There are certain human conditions that are easily identifiable through the course of history — tyrants, fascism, wars, suffering — we know how these things start, and it’s right there in front of us,” Chaney explains. “The challenge that all of us have is how to effectively engage people to better understand our history and engage them to want to learn more.”

The American Heritage Museum, located at the Collings Foundation’s headquarters in Stow, strives to meet that challenge by preserving and exhibiting rare large-scale artifacts and hosting “living history” events. While the pandemic impacted its late 2019 debut, Chaney says the museum now is being recognized as “a real treasure to the Northeast, in addition to the country as a whole.”

The idea for the museum was conceived after the foundation was selected in 2013 to receive Jacques M. Littlefield’s collection of tanks, armored vehicles and military artifacts. Fascinated with military vehicles, Littlefield amassed the world’s largest privately held collection of such objects — over 200 major artifacts — prior to his death in 2009. Today, Littlefield’s pieces constitute the majority of the American Heritage Museum’s displays.

The collection winds chronologically through a 65,000-square-foot building that features not only artifacts but also multimedia displays designed to provide “a truly moving experience,” Chaney says. The visit begins with the Revolutionary War and then proceeds through the Civil War, World War I, World War II, the Korean War, the Cold War, the Vietnam War, the Gulf War and the war on terror.

Of the 80 tanks and vehicles, four are the only pieces in North America and two are the only pieces remaining in the world. Rare aircraft like a P-40 Warhawk that survived the attack on Pearl Harbor also are on display. “When people come here,” Chaney says, “they just can’t believe what we have.”

The majority of the museum’s docents are veterans, so “most of them have a very deep knowledge of the history being represented, and many were actual tankers,” Chaney says. “It’s like going to an art museum and then being able to speak with the artists.”

Starting in May, the museum also hosts interactive history events. “We have a motto,” Chaney says, “that if you read about history, you might remember it, but if you experience something from history, you tend not to forget.” Upcoming events include tank demonstrations, a classic automobiles event, a Revolutionary War reenactment, a WWI aviation event and a WWII battle reenactment.

“When people see these things, at first, it’s entertaining, it’s exciting, it’s fun,” Chaney says. “But in the end, what’s really neat is that all of these things are learning moments. Through being entertained, people will want to learn more about American history.”