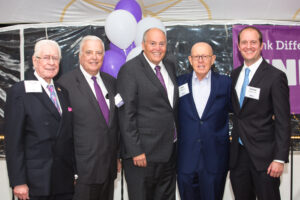 On Oct. 13, UniBank, which has 13 locations across Central Massachusetts, announced the founding of UniBank Charitable Foundation, an endowment of $2 million. The foundation will support local nonprofits and organizations.

CEO Michael Welch says establishing a foundation is a way to “recommit ourselves to being a mutual bank” and to ensure UniBank’s charitable giving in perpetuity. The long-established bank celebrated its 150th birthday last year, but Welch says the company still is eager to introduce itself to the community and explain what makes UniBank different from other banks.

As a mutual bank, Welch explains, UniBank does not have shareholders and stockholders to whom it must pay dividends, “so that gives us a great deal of freedom. We can take the long view on different situations. It provides us an opportunity to give back to the community a larger proportion than most stock banks are able to.”

At the event announcing the foundation, each attendee was asked to choose a charity to which UniBank would donate $1,000. Peter Waisgerber said he chose the YMCA Family Outdoor Center in Hopkinton “in support of scholarships for summer camp, after-school care and the Y’s work to address food insecurity for families in need.”

Another attendee, Susanne Odell Farber (Hopkinton Independent’s director of business development) said she chose the Mental Health Collaborative of Hopkinton “because of the impact they are making in educating all members of communities about mental health and decreasing the stigma so that nobody suffers in silence.”

While envisioning the company’s future, Welch said UniBank has been considering the following question: “How are we positioning ourselves in the community? Not for the last 150 years but for the next 150 years.” The answer: “We’re leading with giving.”

It is community members themselves who enable UniBank to give back to its neighborhoods, Welch says: “Because they bank with us, we are able to give.” For those who aren’t yet customers, Welch adds, “If you would like to join us, we’re going to do even more. This is just a warm-up act.”

In addition to the new endowment, UniBank will continue to give $750,000 in annual contributions to community organizations. Over the last three years, the bank has donated more than $4 million. “The more money we make,” Welch says, “the more we’re going to give away. That’s the driving force of UniBank.”

Welch says this mission motivates his team members across the company. “We’re all searching in our lives for something more, to be part of something bigger than ourselves,” he says. “We all have to work for a living, but I think we’re longing to be part of institutions that mean something.”

Historically, true community banks helped and engaged with local residents, Welch reflects. “As we emerge out of the pandemic,” he says, “I think people are going to be looking for those institutions that we can embrace, that have been part of our life, and I would like UniBank to be one of those.”

UniBank’s Hopkinton branch is located at 87 West Main Street and can be reached at 508-435-0005 or online at unibank.com/Hopkinton.