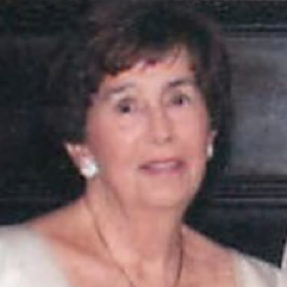 Mary M. (McNamara) Dever, of Hingham, died peacefully at home surrounded by family Nov. 5. She was 96.

Born in Boston on Dec. 13, 1924, she was raised in Dorchester and was the daughter of the late Ambrose and Winifred (Murray) McNamara. Mary attended local schools and graduated from Mt. St. Joseph Academy with the Class of 1942. A graduate of Carney Hospital School of Nursing, Mary worked as a registered nurse for many years. She was especially proud to serve as a cadet nurse during World War II and her long career as a visiting nurse for Hingham VNA.

Mary was a longtime parishioner of St. Paul’s Parish in Hingham, where she served as a Eucharistic minister while devoting her time as a spiritual mentor to others.

Mary was the beloved wife of the late Robert C. Dever, who died in 2013. The two shared 59 years of loving years of marriage. She was the devoted mother of Robert Dever Jr. (Robert III and Matthew) and wife Debra of Stoughton, Maryellen Dever of Hingham, Jane Barry and husband John (Christopher) of Hanover, Susan Marriner and husband William (Jared, Caroline and Andrew) of Hanover, Peter Dever (Peter Jr. and Adelaide) and wife Monique (Brian) of Wake Forest, North Carolina, Paula Hill and husband Greg (Gavin and Alana) of Concord, Timothy Dever and wife Amanda Kim (Vincent) of Highlands Ranch, Colorado, and Terrence Dever and wife Andrea (Julia and Lauren) of Hopkinton. Mary was the dear sister of Sonia Keegan and late husband Laurence of Falmouth, the late Barbara O’Neil and husband David, the late Paul McNamara and surviving wife Eileen of Whitman, and the late Jane Wood and husband Philip. She also is survived by her sister-in-law, Geraldine (Dever) Mayer of Quincy, and many loving nieces and nephews.

Relatives and friends are respectfully invited to greet the family during the visiting hours on Wednesday, Nov. 10, from 4-8 p.m. in the Pyne Keohane Funeral Home, 21 Emerald Street (off Central Street), Hingham.

In lieu of flowers, donations in memory of Mary may be made to Sisters of St. Joseph Retirement Fund, 617 Cambridge Street, Brighton, MA 02135.