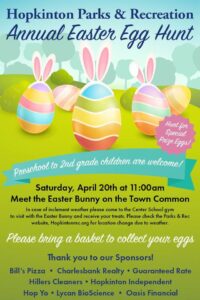 One of the traditional signs of spring in Hopkinton is the annual Easter Egg Hunt at the Town Common, organized by the Parks and Recreation Department.

With longtime sponsor Hopkinton Drug no longer involved, the event’s future was in jeopardy. The call went out to the Chamber of Commerce, which rallied its members. Following donations and support from companies including Oasis Financial, Hiller’s Cleaners, Hop-Yo, Guaranteed Rate, Charlesbank Realty, Lykan Bioscience and our own Hopkinton Independent, the event is back on solid ground.

“It’s just doing something good for the town of Hopkinton and the kids,” said George Vrahliotis, who has run Hiller’s Cleaners in town for almost two decades. “It’s important to help the town grow.”

At the event, scheduled for April 20, about 10,000 plastic eggs are spread around the Town Common by high school volunteers, prior to the arrival of the families with young children. The Easter Bunny is on hand to greet the participants and pose for photos. At 11 a.m., after a brief announcement from Parks and Rec director Jay Guelfi, the fun begins as the youngsters race around the grass in search of the prized eggs. The majority of the eggs contain candy, although some will have gift certificates for frozen yogurt at Hop-Yo, and a few specially decorated eggs can be exchanged for baskets filled with goodies (donated by Oasis Financial).

It’s a treasured tradition in town, and thanks to the support of the business community it will continue.

For more information about the Easter Egg Hunt, check the Parks and Recreation website at hopkintonma.myrec.com. 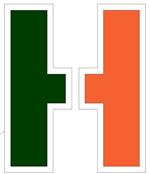 On a far less positive note, Hopkinton High School principal Evan Bishop sent an email to parents on March 21 to address the discovery of a hate symbol in a classroom.

According to Bishop’s letter, a small swastika was found on a student desk in a third-floor foreign language classroom on March 19. Administrators were trying to identify the individual responsible but were not immediately successful. The Hopkinton Police Department was notified.

“There is absolutely no place for hate of any kind in our school community,” Bishop wrote in his email. “The actions of one person cannot be allowed to overshadow the overwhelming kindness and empathy our students, staff, and community embody every day inside and outside the classroom.

Bishop assured that the administration planned to continue to support and work with students to improve issues of respect and tolerance at HHS.

Wrote the principal: “The work of promoting tolerance, acceptance, inclusivity, and respect is an ongoing process with young adults and presents itself often in unpredictable ways that fall beyond the scope and sequence of our daily curriculum. At HHS, we see these as teachable moments, although painful and uncomfortable, and help bring students to a place of mutual respect regardless of each other’s differences.”

Bishop and Superintendent of Schools Carol Cavanaugh declined to comment further about the incident when contacted by the Independent. 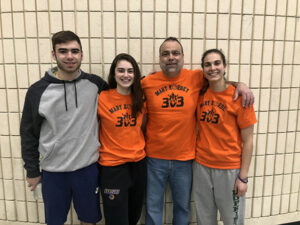 The Korbey family was out in full force for the third annual Mary Korbey 3v3 Basketball Tournament on March 17. Family members volunteering at the event included (from left) Cooper, Calli, Mike and Mikala.
Photo/submitted

The third annual Mary Korbey 3v3 basketball tournament was held March 17 at Hopkinton High School to raise funds for charity in memory of the popular former Hopkinton youth sports coach and local real estate agent who passed away in 2015.

More than 40 teams, comprised of players as young as fourth-graders and as old as 40-plus competing in a variety of divisions, participated in the event — which drew a good crowd despite the fact that it conflicted with the Hillers hockey team’s appearance in the state championship game at TD Garden.

Proceeds benefited the Korbey Children’s Support Trust and the Hopkinton Relay for Life.