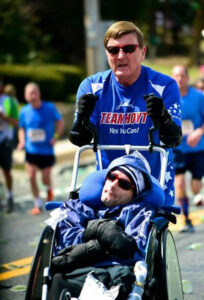 Dick Hoyt stopped pushing his son, Rick, in the Boston Marathon after 2014, but he is considering returning for the 2020 race.

Back surgery and some recent health scares will keep Dick Hoyt from pushing his son, Rick, at this year’s Boston Marathon, but the loving father, accomplished athlete and Hopkinton icon said he is hoping to return to his favorite race next year.

“I want to start up again, I am feeling better now, starting to run, I would like to be ready to start running marathons again,” Hoyt said. “The goal is to be out there next year.”

Complications at birth left Rick Hoyt a spastic quadriplegic with cerebral palsy and confined to a wheelchair. The first time Dick pushed his son in a race was in 1977, a five-mile charity event. Rick told his father after the race, “When I’m running, it feels like I’m not disabled.”

And so began a journey that has made the Hoyts legendary in the world of endurance sports, particularly the Boston Marathon. Dick Hoyt had said 2014 would be his final run from Hopkinton to Boylston Street, a grand finale after their 2013 race was stopped early along with thousands of other runners following the terrorist attack at the finish line.

Rick Hoyt has continued to complete the marathon, now being pushed by Bryan Lyons, a longtime member of the Team Hoyt charity program. The duo is hoping to be back out there again this year, but it depends on the weather. Rick recently spent some time in the hospital after a bout with pneumonia — he had to be airlifted from Western Mass. to Brigham and Women’s Hospital in Boston. Rick ended up soaked to the skin after pouring rains hammered the runners on Patriots’ Day a year ago, and likely will have to scrap plans to run this year’s race if the weather doesn’t cooperate.

“They are going to wait until marathon day, it will come right down to that morning or the night before,” Dick Hoyt said. “They will be prepared to do it, but there is no way he is going to be able to if the weather is something like last year.”

Rick recently was admitted to a different hospital, his father said, but should be ready to go on Patriots’ Day.

Either way, the Hoyts, who had a statute erected in their honor in from of Center School in Hopkinton in 2013, will be a part of this year’s Boston Marathon. Team Hoyt has 15 charity runners, two duos, and four qualified runners ready to race, Dick Hoyt said, with a variety of charities benefitting from their fundraising efforts. Through the years, Team Hoyt has raised more than $1 million for Easterseals, a nonprofit that provides services for people with disabilities.

Dick and Rick have participated in 32 Boston Marathons and more than 1,000 events worldwide, including ironman triathlons. Competing has taken the father-son duo to Hawaii, Canada, Japan and Germany, but they feel most at home in Hopkinton.

“There is no doubt about it, Hopkinton has adopted Team Hoyt,” Dick Hoyt said. “The people of Hopkinton have been unbelievable to us. It’s just been awesome.” 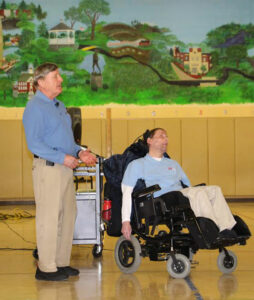 Team Hoyt has made numerous appearances in Hopkinton, including a visit to Elmwood Elementary School to speak to students.