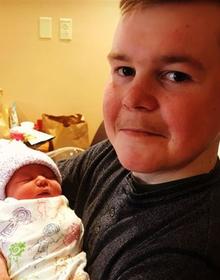 Carl “CJ” Harris Jr., 27, an old soul, completed his journey on earth on March 29 at Boston Children’s Hospital, of complications from a bone marrow transplant last May. With his parents by his side, he is finally free from pain.

Always with a smile and a kind word to all who he interacted with, he remains an example of one who is known and loved by all. Hearts are breaking all over the world.
Born Jan. 7, 1993, in Framingham, CJ lived in Hopkinton for many years. He enjoyed Little League, spending time with his cousins and grandparents and tearing up the neighborhood on his four-wheeler.

In 2004 CJ and his family moved to North Sandwich, New Hampshire. CJ enjoyed the great outdoors of New Hampshire for over 10 years. Snowmobiling, four-wheeling and riding his dirt bikes over Young Mountain were his passions. CJ played Sandwich Lot Baseball, loved the Sandwich Fair, and enjoyed camping in the Notch with Kyle and jumping off the RT 113A bridge into the river. Along with numerous Craig’s List purchases, these were just a few of his well-known shenanigans.

CJ attended Inter-Lakes High School in Meredith, New Hampshire, and graduated in 2011. In the fall of 2011 CJ began his four-year college experience at Colby Sawyer College in New London, New Hampshire. Majoring in history, CJ experienced college life to the fullest. While attending college, CJ was an RA, a stage show actor and a potter extraordinaire. Many of his college friends visited him frequently while he was hospitalized.

CJ had many passions in his life, including his RX-8, cooking, shooting guns and his many friends. But most of all he enjoyed his Harley-Davidson. Riding for CJ meant freedom, and he logged many miles, including countless trips to Nova Scotia; York, Pennsylvania; Daytona, Florida; and many points in-between. He was a member of the Winnipesaukee HOG Chapter. CJ also enjoyed the annual “guys weekend” trip to Americade in Lake George, where it is was said, “He is the only real rider of the group.” He was a legend among men.

He was a co-founder of the annual Heather’s Ride out of Meredith, New Hampshire. For 10 years money was raised for his sister’s Patient Support Fund at Boston Children’s Hospital. Over $140,000 was raised in nine years.

His proudest moment was officiating the marriage of his sister, Nichole, to his best friend, Kyle.

CJ leaves in sadness his mom, Barbara (Lutz) Harris, and dad, Carl D. Harris Sr. of Candia, New Hampshire, his loving sister, Nichole Perreault and her husband, Kyle, of Effingham, New Hampshire, and the apple of his eye, his niece, Leah Perreault. He also leaves loving grandparents Harold Lutz of Black Rock, Nova Scotia, and Donald and Julia Harris of Hopkinton, and many aunts, uncles, cousins and friends. He was predeceased by his sister, Heather Siebert, “Gramma” Dorothy Lutz of Black Rock, Nova Scotia, and aunt Susan Mespelli of Upton.

The epitome of the word “warrior,” he endured medical challenges too many times in his short life. He would want his doctors and nurses and all of his “friends” at Boston Children’s Hospital to be remembered for their attention and commitment to helping him through his medical struggles and very lengthy hospitalizations.

In lieu of flowers, the family is asking for donations be made to the Pediatric Patient Assistance Fund, #9999052, at Dana-Farber Cancer Institute.

Burial was to be private. A celebration of life is planned for May 17 at Searles Castle in Windham, New Hampshire, if allowed during these uncertain times.