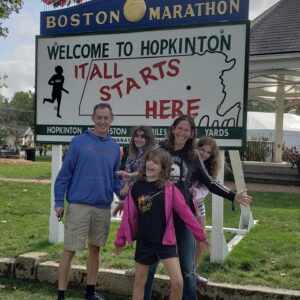 James Casady and his wife, Ilana, are joined in front of the Boston Marathon sign at the Town Common by their three daughters, (from left) Nili, Liat and Raya.

Running the Boston Marathon after beating cancer is an impressive feat. James Casady, however, is an impatient man. The Hopkinton resident is going to run Boston this month while he’s still undergoing treatment.

Casady was diagnosed in December 2020 with high-risk smoldering multiple myeloma. The cancer was caught very early, and he was fortunate to be able to participate in a drug trial which has been very successful.

He’ll take a break from his medications leading up to the April 18 race and walk the five blocks from his house to the start line, prepared for a different kind of marathon than he’s tried before. Then it’s right back to the hospital to continue the fight against the disease.

“It should be an amazing day for a lot of reasons,” said Casady, who is running as part of the Dana-Farber Marathon Challenge team. “They’re giving me one extra week of treatment off, I have a little time off from the meds before the marathon, so I should feel good. Then I run the Marathon on Monday, and then Tuesday I head in for early morning treatment, so I’ll be right back in it.”

Casady, who owns Platinum Physical Therapy, which has locations in Hopkinton, Ashland and Milford, first was made aware of a problem in the fall of 2020 after some routine bloodwork.

“In December 2020 I ended up in Dana-Farber, and they gave me a diagnosis of high-risk smoldering multiple myeloma,” he recalled. “They caught it super early, which is great, and it improved my prognosis, of course.”

Casady was told that in most cases elsewhere in the country, doctors would just watch and wait for symptoms to arise, including kidney failure and bone fractures. However, Casady was fortunate to be placed into a trial at Dana-Farber that includes four drugs — two that he takes in pill form and two via an injection. He began the treatment last April.

“The first six months were pretty brutal because I was going every single week and getting a lot of the drugs,” the 48-year-old said. “Now I’m technically on maintenance, which is every other week, and the doses are a little bit less, so it’s much more tolerable. I’m doing much better, I’m working almost full-time now, I’m able to exercise a little bit and things like that. Comparatively, I’m doing way better. My treatment weeks are still a little bit rough, but they’re doable.

“When I started the trial, about 20 percent of my bone cells were myeloma cancerous, and they said usually around 50 percent is when you start breaking bones and having kidney failure and stuff,” Casady continued. “Now I’m down below 5 percent. Two of my three markers are within normal limits and I’ve got one more I’m trying to get down. So it’s definitely helping a lot.”

Of course, the other challenge with cancer treatment is psychological, and Casady acknowledged it often can be more difficult than the toll on the body.

“It definitely has been a big rollercoaster, those first six months especially,” he said. “I was very surprised. I didn’t know what to expect. The mental and emotional was at least as hard and probably harder than the physical. Because the physical you just kind of deal with — you don’t feel well, you’re sick, you’re tired, you have all sorts of other side effects going on. But man, that rollercoaster of emotions, with depression, there’s just a whole lot to deal with there. It was definitely a rollercoaster and it continues to be. Less so now, we’re in more of a routine, we’re getting comfortable with it, I’m feeling better physically, which helps. But it’s still up and down. It’s tough for sure.

“Definitely any time I’m getting outside and exercising I feel much better. Then also, I’ve done the runs with the Dana-Farber team a few times. Just being in that group of people in that environment is very positive and kind of empowering. So that’s all definitely helped a lot.”

Added Casady’s wife, Ilana: “One of the drugs that James takes is a pretty strong steroid, and it’s definitely like a rollercoaster of emotions, especially for the four days after. So the kids will joke, ‘Oh, it’s just Dad’s steroids.’ It’s kind of a joke in the family where if he gets mad at them, they’re like, ‘Dad, it’s just your steroids talking, you’re not really mad.’ So we can kind of laugh at it.”

Casady had a conversation with his doctor before deciding to try his first marathon since Boston in 2019. He was given the green light, in part because exercise is a key part of staying healthy.

“As long as I do everything in moderation, now that I’m down below 5 percent of myeloma cancer cells in my bones, they want me to exercise and do what I can, what I have energy for, because it will ultimately strengthen the bones,” he said.

Added Casady: “I said, ‘Listen, I’m going to be smart. If I start training for this and I get to 8 miles or 10 miles and that’s just that, I’ll just not do it.’ I would love to be able to do it, but I was like, ‘Believe me, I’m not going to do anything stupid to hurt my health.’ ”

Casady also has the support of his family — wife Ilana, their three young daughters, and his two older daughters from a previous marriage. Ilana, also a veteran marathoner and Boston qualifier this year, will run and walk Boston alongside James. (She’ll then head to California to run the Big Sur Marathon the following weekend.)

When it came to choosing a charity to support, James had one organization in mind.

“Dana-Farber is just such an amazing place,” he said. “I’ve been so impressed with them this entire time, from the time I started and got diagnosed, from the parking attendants to the phlebotomist, every single person in there is just unbelievable. So I wanted to give back.”

As a longtime runner — he’s competed in almost a dozen marathons — Casady has had to dial back his expectations this year.

“Training hasn’t been what I first envisioned it would be,” he said with a laugh. “I just can’t do nearly as much. I need a lot of recovery between runs, and during treatment weeks I can’t do much, so I’m doing way less than I ever planned to, even though I was going to do it conservatively anyway. But with the walking breaks it seems to be OK. I think I’ll be all right.

“[Monday is] going to be a walk-run, it’s going to be a much different marathon than I’ve done before. But I was like, hey, if I can just finish and raise a bunch of money for Dana-Farber that would be awesome. It should be a good day. I think it will be fun and meaningful.”

← Trio of longtime town employees selected as Boston Marathon race starters Letter to the Editor: Mannan for Select Board →