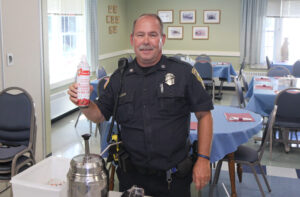 This year’s official starters for the Boston Marathon, selected by the Hopkinton Marathon Committee, include three Hopkinton residents who, combined, have worked for the town for more than eight decades.

Powers will fire the starter’s pistol for Wave 2, Mansir for Wave 3, and Carver for Wave 4.

Powers lives along the path runners take from the Athletes Village at Hopkinton High School to the starting line.

“I’m very seldom home because of mandatory work for all officers, but my wife always opened the house for runners to keep warm and to use the bathroom and just rest before they head to their corral,” said Powers, who will be working for the HPD on Patriots’ Day for the 35th year. “She has hosted the Marine Corps Semper Fi Running Team for many years and many other runners.”

Powers served in the U.S. Air Force before becoming an auxiliary police officer in Upton, then worked full-time for the Hopkinton Police Department starting in 1987 until his retirement in January. For most of those years, he worked as the school resource officer, and has been known as Officer Phil or simply O.P. to Hopkinton students and their families for decades. Over his years of involvement with the Boston Marathon, Powers said he most enjoyed “meeting and talking to people from all over the world, as well as the spirit and the positivity of the runners.”

Having grown up in Hopkinton, Mansir said, “I remember there only being one start for all of the runners at noontime. Not four different waves like now. I also remember several residents that live in the downtown area having gatherings/cookouts and then walking around freely downtown to enjoy the day!”

Mansir has little free time on Patriots’ Day now. Through his work with the DPW, he has been involved with 25 Boston Marathons.

“In my position as the highway manager and the DPW representative on the Marathon Committee, I would have to say the most challenging aspect of the Marathon is coordinating and overseeing all of the work that goes into preparing for the Marathon and cleaning up and breaking everything down after the Marathon is over,” he said.

Mansir and his crew work both to make Hopkinton look and operate at its best for the thousands of runners descending on the town, and to return the roads and public areas to their best for residents once the runners have departed. He will take a short break from his Marathon-related tasks to start Wave 3.

Carver grew up and still lives on Hayden Rowe Street, where runners used to line up for the start. She remembers setting up a water stop in front of her house for the runners preparing to head to Boston. She retired in February after 25 years as administrative assistant for the Hopkinton Fire Department. She has been a part of securing permits from the HFD for vendors setting up in town for the Marathon. She enjoyed the buzz of many meetings in the station in the months leading up to the marathon. She’ll walk up to the start this year as usual with her family, but instead of just watching and cheering, she’ll be starting Wave 4.

“I am honored,” she said. “My family is very excited.”

Below are the starting times for this year’s race: