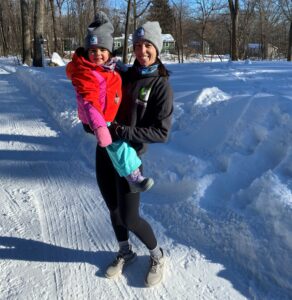 Margot LaFreniere is running Boston to support the foundation named for her daughter, Sophie.

Since the age of 2, Sophie LaFreniere has demonstrated strength and endurance in her long battle with glycogen storage disease (GSD). This month, her mother, Margot, will put her own endurance to the test as a participant in the Boston Marathon.

“I always wanted to run the Marathon, and wanted to do it for a good reason — and what better reason than to run for my daughter?” Margot says.

GSD is a rare and life-threatening genetic disease wherein the body is missing the necessary enzyme to convert glycogen to glucose. GSD has many forms. Sophie has Type 1B, which is the most rare, affecting only one in a million people.

The condition requires constant monitoring of Sophie’s blood sugar levels. Her parents used to have to prick her finger several times a day, but recently, thanks to a Dexcom continuous glucose monitor, that process has gotten easier.

“The Dexcom helps a lot,” says Margot. “We’re able to watch her carefully and watch what her blood sugar is doing all the time. It allows her to do things like gymnastics, and she’ll go to school next year.”

“It helps us see trends, see what’s working and what isn’t,” explains Sophie’s father, Jamas. “And it can catch dangerous moments, catch a low coming. We still have to do finger-pricks sometimes to make sure it’s accurate, but it’s been incredibly helpful and allows us to give her a little more freedom.”

“She has salad for lunch every day, mostly with grilled chicken and pistachios. For breakfast she usually has a vegan egg, an egg alternative, because she has a dairy and egg allergy, too. For dinner, she eats what we’re eating — chicken or fish with vegetables. Just a very lean, healthy diet,” says Margot.

“She’s a good eater, she does good with it,” adds Jamas. “We’re lucky that she’ll eat like that, it’s pretty rare for a kid.”

Keeping her sugar level stable also requires that Sophie ingest corn starch every four hours around the clock. If a dose is missed, she risks seizures from hypoglycemia.

“The corn starch is literally what keeps her alive,” notes Jamas.

Sophie, now 4, was diagnosed in September 2019. Her parents established Sophie’s Hope Foundation (sophieshopefoundation.org) in May 2020 to raise funds for research and, ultimately, find a cure.

“There’s not much research, because the disease is so uncommon,” says Jamas. Currently, there are approximately only 500-800 people with GSD in the United States. In such cases, money for research often comes from private foundations and nonprofits.

So far, Sophie’s Hope Foundation has been able to award a grant to fund one research project and is in the process of evaluating more. Meanwhile, the foundation has morphed into a global patient advocacy organization.

“We’re launching an online patient registry in March,” shares Jamas. “We’re building a network of doctors and researchers, and as we’ve raised money, we’ve formed a pretty good strategy on how to move forward.”

Sophie hasn’t let her condition slow her down. She loves farm class, animals and playing outdoors, especially with her 6-year-old sister, Alison.

“She’s very active, she’ll pretty much do anything her older sister is doing,” Jamas says with a fond chuckle.

Margot isn’t slowing down, either. She took up running and competed in a triathlon last summer as well as a half-marathon in November.

“Exercise has become my stress outlet throughout Sophie’s diagnoses,” she explains. Now, in preparation for the Boston Marathon, she runs four times a week and also does strength training.

Choosing the Boston Marathon was a natural fit — the Hopkinton residents live less than 2 miles from the starting line.

“We grew up in the area, and with the money they raise, the energy, the good that they’ve done over 126 years, it’s something really exciting to be part of,” Jamas says. “It gives us a great opportunity to spread awareness and reach a different type of network.

“And it’s sort of an analogy to Sophie’s journey. It’s been kind of a marathon to find a way to deal with it and to search for a cure.”

Margot agrees: “With everything that Sophie goes through daily for her treatments … if she can do that, I can run a marathon to raise money to find a better treatment for her, and for others who struggle with GSD.”

LaFreniere’s Boston Marathon fundraising page can be found at givengain.com/cc/sophieshope2022bostonmarathon.