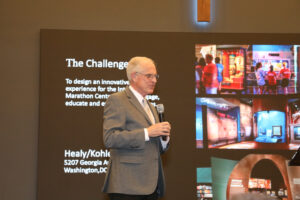 Tim Kilduff speaks at a recent event to share details about the International Marathon Center, which is to be built off East Main Street. PHOTO/JOHN CARDILLO

The planned International Marathon Center in Hopkinton is continuing to make strides toward becoming a reality, as the organizers recently hosted a preview night and plans have been drawn up to bring the space to life.

Hopkinton’s Tim Kilduff, who in addition to being executive director of the 26.2 Foundation is a longtime Boston Marathon television analyst and a former race director, highlighted a number of steps that have already taken place as well as those still in progress. Last May, the IMC inked a 99-year lease with the town for the 19-acre site. The property is located on the marathon route, less than a mile away from the starting line, on the north side of East Main Street (Route 135).

Organizers also have worked with Gorman Richardson Lewis Architects of Hopkinton to come up with the blueprint for the venue itself.

“We’ve drawn up plans for a state-of-the-art, 25,000-square-foot facility that will include not only a world-class museum and hall of fame, but also 11,000 square feet of dedicated exhibit space, an auditorium, library, conference and educational space, and more,” Kilduff said.

During the recent sneak peek, Terry Healy of HealyKohler Design demonstrated what visitors to the IMC will see once the center opens.

The experience will begin with exhibits focusing on ancient Greece and the very foundations of democracy, Healy said, before transitioning to the first modern Olympic Games in 1896 and, one year later, the very first running of the Boston Marathon.

“The first part of this visitor experience is we are dictating to the visitor that you have to go along that path,” Healy told the crowd assembled at Faith Community Church in early March. “Because along that path gives you that history, the rich history of the marathon.”

The exhibits also will demonstrate why the center is in Hopkinton and provide the history of the town’s connection to the event. The best part of the experience, Healy said, will be the “start line” visitors then cross as they make their way farther into the IMC, where an array of exhibits await on all sides of the space.

Visitors will be able to customize their experience, Healy said. They will receive a tracking chip similar to those that used to be given to runners at the start of a marathon, and can move through the experience and personalize their visit by building their own marathon, he said, even allowing visitors to design their own route and logo for their “fantasy marathon.”

After visitors cross the “finish line,” they will proceed to the Hall of Excellence, where they can learn about some of the people who have helped shape the Boston Marathon for well over a century.