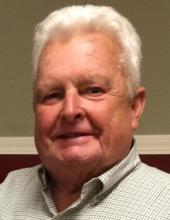 Mr. Charles H. “Butch” Morris Jr., 77, of Cotuit and formerly of Milford, passed away July 21 in Cape Cod Hospital, Hyannis. He was the husband of Beverly A. (Lawson) Morris.

Mr. Morris was employed at the former EMC Corporation in Hopkinton for many years. Previously, he worked for the former Digital Equipment Corporation.

Butch was born in Natick, the son of the late Charles H. Morris Sr. and the late Doris (Gibson) Morris, and was a graduate of Natick High School, where he played varsity baseball.

A resident of Cotuit for the past six years, he previously lived many years in Milford. Butch loved anything that was John Deere. In his youth, he enjoyed restoring hot rods. He also loved baseball and watching his grandchildren play ball, Cape Cod and spending time with his family.

In addition to his wife, Beverly, of 54 years, he is survived by his daughter, Kristen M. Quattrochio and James DiPadua of Clinton; his son, Dustin C. Morris of Milford; three siblings, Robin Tsolas, Cuffy Morris and Lainee Morris; and eight grandchildren, David, Eric, Caitlin, Natalie, Charlotte, Tony, Zach and Nick. He was predeceased by a son, Sean M. Morris.

Visiting hours will be Monday, Aug. 1, from 5-7 p.m. in the Buma-Sargeant Funeral Home, 42 Congress Street, Milford.

Funeral services will be Tuesday, Aug. 2, at 11 a.m. in the funeral home. Burial will follow in St. Mary’s Cemetery on Cedar Street in Milford.