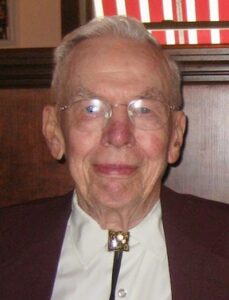 Dr. Charles Osgood Parker of Harwich died Feb. 10 after living a healthy and productive 101 years. He lived in his home overlooking Long Pond, with his beloved wife of 75 years, Loraine Whiteford Parker. Charles was born in the Flatbush area of Brooklyn on Nov. 11, 1919, the son of Horatio and Amabel (Rogers) Parker. He was predeceased by his older sisters, Alice Case and Helen Saunders, and his youngest son, Glenn Whiteford Parker.

He is remembered by all for his kindness, warm and gentle spirit, intellect, wide-ranging interests and concern for leaving the world a better place.

Charles graduated from Erasmus Hall High School in Brooklyn in 1936 and grew up spending summer months at Cedar Lake, New Jersey, and Dingley Island, Maine, on Casco Bay. He began his studies at Bates College in Lewiston, Maine, at the age of 16, and graduated before the United States entered World War II in 1940. He enrolled at Columbia University, but his graduate study was interrupted when he was recruited by the National Defense Research Committee (NDRC) outside Pittsburgh, where he worked on advanced munitions associated with Monsanto. Toward the end of the war he was transferred to Dayton, Ohio, to develop rocket engines to assist aircraft takeoff.

Charles and Loraine, who grew up just around the corner from each other in Brooklyn, were married in the Flatbush Congregational Church on June 16, 1945, just after the end of the war in Europe. He completed his Ph.D. in chemistry at the Polytechnic Institute of Brooklyn in 1950, and moved to Huntsville, Alabama, where he developed rocket fuels with the government contractor Rohm & Haas. The family grew to four children, and he encouraged their involvement in swimming and scouting. His family loved Huntsville of the 1950s and ’60s. During these years, the family spent summer vacations traveling, covering 49 of the 50 states. Charles served as president of the Rohm & Haas Investment Club, was an assistant scoutmaster in all three of his sons’ Boy Scout troops, and pursued his hobbies of carpentry, model trains and tropical fish. Shortly after the Apollo moon landing, the U.S. Space Program was cut back, and in 1970, the family moved to Richboro, Pennsylvania, in Bucks County, where Charles continued his employment with Rohm & Haas, working on agricultural chemicals and polymers.

He retired in 1980 and moved with Loraine to a picturesque, wooded bluff overlooking Long Pond in Harwich, where he could be closer to New England family members. Interested in sustainable energy, Charles sought out a Pennsylvania architect, Paul d’Entremont, to collaborate with him in designing a highly efficient active/passive solar retirement home with extra bedrooms to encourage visits from family and friends. With the kids having flown the coop, Charles and Loraine enjoyed traveling for 35 years to various parts of the world — Europe, India, Australia, New Zealand, South America, Africa and the Caribbean — taking pictures and assembling travel albums. Avid bridge players for most of their lives, and having begun square dancing earlier, they passed many Cape evenings playing bridge and dancing with friends. They hosted many friend and family gatherings and loved having their adult children and families visit them during the summer months and holidays.

Charles was a lifelong learner, teaching himself how to use the computer at the age of 75. He also developed a keen interest in genealogy and traced his family lineage back more than 400 years. His roots ran deep in the area. His maternal grandfather served as the Chatham town doctor in a house that is now the Chatham Candy Manor. Charles’ father, Horatio, who was principal of Chatham High School, later ended up falling in love with and marrying the doctor’s daughter, Amabel, in 1903. For decades, Charles recorded detailed water quality measurements from sounding locations in Long Pond and Black Pond. He served for 10 years as the president of his neighborhood association, and he and Loraine have been loyal alumni of their alma maters, Bates College and Wheaton College.

Charles and Loraine lived at Heatherwood (Yarmouth Port) for nine years. They made fast friends and partook in all activities and events. However, by the ages of 94 and 97, they had outlived most of their friends. So, they moved back to their Long Pond home to live by themselves. There, Charles enjoyed time in his basement workshop, bird watching, walking to their beach, watching his beloved Patriots and Red Sox games, enjoying visits from family, and, along with Loraine, routinely reading four novels every two weeks. A week after his 99th birthday, in 2019, Charles suffered a mild stroke, which caused him to lose most of his hearing. He very much missed the freedom of driving with Loraine in his Prius to run errands. Fortunately, they were introduced to the Nauset Neighbors organization, which has helped them with transportation and companionship, Visiting Nurses, and the Harwich Council on Aging for meal services. In addition, Annalisa Schmidt has provided crucial in-house nursing care. For these services, they have been most grateful.

Funeral services are under the care of the Morris, O’Connor & Blute Funeral Home in Harwich and will be private. In memory of Charles, do something kind for someone.