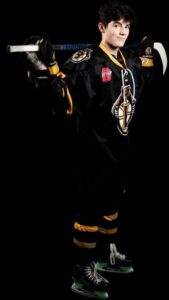 Hopkinton teenager Chris Delaney, who currently plays for the Boston Junior Bruins, plans to play junior hockey in Chicago in 2021 after being drafted by a team there.

Hopkinton High School freshman Chris Delaney is about to embark on a very different high school experience than his friends. Selected in the eighth round of the United States Hockey League draft, Delaney is set to move to the Midwest in a year and take another step toward pursuing his dream of playing professional hockey.

Delaney, 15, has been on skates since he was 2 years old and playing on teams since he was 6. He said he was thrilled to be taken by the Chicago Steel, one of the top teams in the league.

“I was definitely a little surprised, but also super excited,” Delaney said after being selected 107th overall. “It started two months ago when I started talking to Chicago about the draft. We got in contact with them and they looked at my games and my stats and they took a chance on me.”

For the past two years, Delaney has been playing for the Boston Junior Bruins, a junior ice hockey team based in Marlborough.

“That’s been my favorite team because I have been playing up [against older players,] which is a challenge but fun,” he said.

“The size and speed of the game is a challenge,” Delaney added. “I wasn’t used to the speed, but playing up and doing well gave me more confidence and put me on the map for higher-ranked teams to look at me.”

When it comes to junior hockey in the United States, the USHL is the top place to play. The league is classified as a Tier 1 league, putting it on par with Canadian junior leagues. The 16 teams play in Illinois, Wisconsin, Michigan, Iowa, North Dakota, South Dakota, Nebraska and Ohio. The competition is intense and arenas regularly are packed with fans who support their teams fiercely.

For Delaney it’s a chance to hone in on his professional hockey aspirations. At 5-foot-4, he is not the biggest player on the ice, but he said he prides himself on the ability to be a playmaker with the puck on his stick. He said he models his game after another Chicago hockey star, Patrick Kane of the NHL’s Blackhawks.

“We play a similar game, we are playmakers first but also have a good scoring touch,” Delaney said. “I wear number 88 after him, he’s a role model.”

Another role model for Delaney is his father, Chris, who played professional hockey overseas after starring at Catholic Memorial High School and Bowdoin College.

“His big thing is hard work, every day,” Delaney said. “A lot of kids have good skill, but you have to have the work ethic to be a great player.”

Like all other athletes, Delaney has had his training interrupted by the COVID-19 pandemic.

“It’s been tough for me personally, I haven’t been away from a rink for more than a week my entire life,” he said. “I haven’t skated in a month. I’ve been going on runs, working out a lot and trying to stay in game shape.”

He’s also had plenty of time to spend with his large family. In addition to his parents, Chris and Claire, his siblings, Katelyn, 23, Daniel, 21, Owen, 20, Connor, 20, and Riley, 17, all are together under one roof. The family is competitive, Delaney said, and he and his older siblings have spent time playing video games online or basketball.

“I enjoy it,” he said. “We are all up in each other’s space sometimes and it can get frustrating, but we have gotten used to it.”

Once the pandemic slows and he is able to get out more, Delaney plans to train through the summer and get ready for another year at Hopkinton High School and a year with the Junior Bruins. His final two high school years will be spent in Chicago, where he will live with a host family, attend a local school and play for the Steel, who were the USHL’s top team this year before the coronavirus brought the season to a premature end.

“My parents definitely don’t want me to have to move all the way out there, but they are happy for me because they know it’s what I want to do,” Delaney said.

By playing junior hockey in the United States, he keeps his eligibility to play at the collegiate level before turning pro, which he said is his plan going forward.

“I want to play four years of college and then get drafted and live my life and play hockey,” Delaney said. “I just love the competitiveness of hockey, it’s a great sport.”