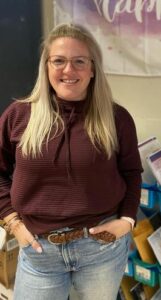 Sarah Comeau was inspired to run in part because this is the 50th anniversary of the first official women’s division in the Boston Marathon.

One foot in front of the other.

That’s how Sarah Comeau is running the Boston Marathon this month.

“It kind of fell in my lap,” said Comeau, who is running on behalf of the Hopkinton Lions Club.

The Millbury teacher and Worcester resident used to work near Hopkinton, and an old co-worker with connections to the Lions Club had an extra bib.

“I just said ‘sure,’ and it’s been a crazy couple of months,” she said.

Comeau might be new to Boston’s premier running event, but she’s no stranger to hitting the pavement.

“It’s been a kind of a long time coming,” said Comeau, who was a college sprinter.

“I always try to keep myself in the competition,” she said. “After I graduated, it was just like, there’s nothing else to do as a sprinter. So I started running some distance miles.”

Comeau began pushing herself to run half-marathons with her fellow track alums and became an avid long-distance runner. She ran a thousand miles last year, and she’s been putting in 120 miles a month in preparation for the Boston Marathon.

“You have to be a lot faster than what I can run, like an eight-minute pace,” said Comeau. “That’s really hard, so I always knew that I had to pick something that would be a fundraiser.”

Runners representing one of the Marathon’s official charities have to raise $5,000 in funds to run the race. As of mid-March, Comeau had raised $3,700 via her fundraising page (hopkintonlions.org/sarah_marathon.html).

“All the money that I raised, I’m really happy that it’s going to the Hopkinton Lions Club because they’ve been super supportive to me,” she said.

Comeau said the community around her right now makes all the difference in her training.

“One of my neighbors, she says, ‘Make your route so you go past me when you have 4 [miles] left, and I’ll run the last 4 with you,’ ” Comeau recalled. “Or I have a friend who will bike alongside me while I run. So those types of things are super important, to have that community and that support.”

But it goes deeper than a sense of community and fundraising for a cause.

“It’s so exciting for me to do this marathon in particular, because it’s the 50-year anniversary since the first women’s heat,” said Comeau. “If I’m ever going to do this, this is the year to do it.”

The Boston Marathon held its inaugural women’s division in 1972. The Boston Athletic Association says this year’s race boasts “the fastest and most decorated women’s professional field,” with Olympic and Paralympic medalists, a three-time Boston Marathon champion, and the fastest women in the world for the years of 2020 and 2021.

Comeau is not only a teacher but a track coach, and she says she often reminds her female athletes of the lengths women have come. Long-distance running, she said, is very mentally challenging.

“I’m always talking to them about, you know, we’ve come so far as women, you have these opportunities, you need to be tough, you need to be strong, because you can do anything.”

Comeau tells her athletes not to allow their bodies to tell their minds they can’t do something. She said they’ve been returning the support as she’s prepared for the marathon, checking in with her and encouraging her.