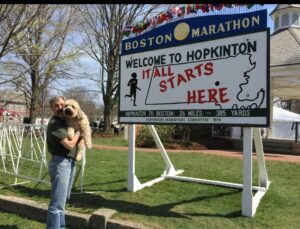 Hopkinton resident Bob Levenson (with his dog, Daisy) has served in a variety of volunteer roles for the start of the Boston Marathon since 2003.

Hopkinton’s Bob Levenson has been volunteering for the Boston Marathon since 2003. “And I still have the jacket to prove it,” he said. He’s amassed many colorful jackets since and has worn many volunteer hats as a member of the Hopkinton Marathon Committee, coordinating parking, organizing VIP hospitality and currently serving as team captain for the start marshals.

A runner since seventh grade, and seriously since high school, Levenson competed for Boston University and continued to run competitively into his 40s. He grew up just outside Boston and used to go watch the Boston Marathon with his father. “In those days, there was no crowd control and you got right up close,” he said. One of his favorite memories as a spectator was giving water to Henry Rono, a Kenyan distance runner who set four world records.

“We moved to Hopkinton in 2000 for the schools,” said Levenson. “The Marathon was a close second. As soon as I moved here I heard about the Hopkinton Marathon Committee and was able to connect with Dottie [HMC chairperson Dorothy Ferriter-Wallace].” The all-volunteer HMC was established in 1979 to work in conjunction with the Boston Athletic Association to coordinate all aspects of the Boston Marathon within Hopkinton. Levenson is one of the committee members working through the year to make the event safe and enjoyable for participants, spectators and residents.

While coordinating parking, Levenson was stationed on South Street. He moved closer to the start while taking care of race VIPs. Now he’s right on the front lines, the last group of volunteers to see the runners before they head to Boston. In his work with the start marshals, Levenson coordinates a group of between 100-125 volunteers who patrol the corrals to allow only authorized runners in and also clean the street between waves of runners.

The most rewarding part of his position, Levenson said, is “seeing the smiling faces of returning volunteers who love being part of the race, and all the thank yous we get from runners who are thrilled, and a bit nervous, to be at the start and appreciate the supportive atmosphere in Hopkinton.”

While it can be challenging to stay smiling on severe weather days, which have occurred many years, Levenson’s team keeps it up.

“I have a group of ladies who have been doing this for years — you know who you are, Sheila’s Shamrocks — one of whom showed up during a torrential and cold downpour,” he recalled. “She was covered head to toe in plastic and used a walker. She was smiling from ear to ear. Boy, was that heartwarming. Probably brought a tear to my eye, which I attributed to the rain.”

Rain or shine, runners can count on Levenson to be there making their Boston Marathon start a positive one.