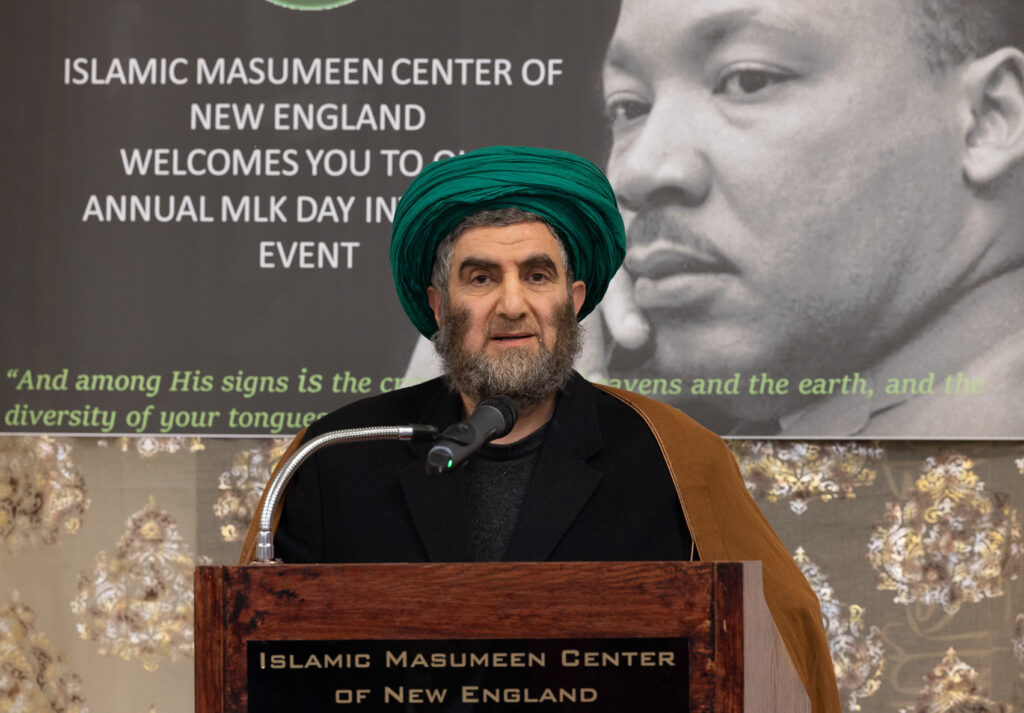 More than 60 people gathered at the Islamic Masumeen Center of New England on Sunday afternoon to celebrate the legacy of civil rights icon Dr. Martin Luther King Jr. at an interfaith celebration that explored how King’s work is reflected in this increasingly diverse and embracing community.

The mosque, founded in 1995, has hosted the celebration for several years. It serves as a place of worship for Muslims from Hopkinton and surrounding communities. The interfaith ceremony is considered to be the highlight of the center’s annual programming and an opportunity to unite people of different backgrounds and faiths.

The mood shifted between jubilation and reflection as guest speakers and performers from the center’s Sunday school classes described the impact of King’s words and actions on their lives. While they spoke with pride about Hopkinton’s increasing inclusivity, they also acknowledged that society has greater strides to make to achieve overall equity.

The two-hour event began with a 15-minute Zuhr prayer ceremony. The non-Muslim guests stood or bowed their heads in reverence as they observed their hosts’ devotion. This was followed by a greeting and recitation of a prayer from the Quran. Its message paralleled King’s philosophy of peace and love for one another.

Several community leaders spoke about King’s message and how its impact can reverberate in today’s society to dissuade racism and all forms of discrimination. The first was Cathleen Dinsmore, the president and founder of the Hopkinton Freedom Team, a local nonprofit dedicated to providing a safe space for people who have experienced abuse or bias because of their race, gender, sexual orientation or disability. She noted that she heard a child talking about how she “made a smile” out of a string of beads during the prayers.

“It’s been hard to smile and see one another smile behind masks for almost three years,” she said.

Dinsmore recalled last week’s unveiling of “The Embrace,” a sculpture in Boston commemorating a hug shared by King and his wife, Coretta Scott King, as he was awarded the Nobel Peace Prize. Dinsmore spoke of how King’s words continue to inspire her in her work as an immigration attorney.

“Dr. King and Coretta Scott King worked tirelessly for justice for all,” she noted. “They recognized the deep interconnectedness of us all and the importance of including everyone in this journey.”

Attendees at Sunday’s event gather for a picture. PHOTO/JOHN CARDILLO

She questioned how people can embrace one another “in a world that’s so divided.” She encouraged residents to “ask curious questions with your mind open and your heart soft, and find those connections that do exist.”

“For lasting and meaningful change, we need to include everyone on this journey toward justice,” Dinsmore stressed. “And it can be here in Hopkinton and everywhere there is a crack — because that is where the light shines through.”

Hopkinton Public Schools Superintendent Carol Cavanaugh reflected on “the moral aspects of education” that King described in his college newspaper article when he was a student at Morehouse College. While the school system stresses academics, it also promotes character and inclusivity through a culturally responsive atmosphere.

“In the Hopkinton Public Schools, we’ve adopted the mantra ‘All means all,’ ” she explained. “To achieve that end, all students need to feel welcome, supported and respected, both by fellow students and the adults in our institution.”

Cavanaugh said the district hired a director of English language acquisition, equity and access as well as a director of social emotional learning and a social worker as a means of reaching that goal.

Likewise, the Islamic Masumeen Center of New England also promotes culturally responsive learning through this and other events it hosts, she added.

“This event, I think, grows our understanding of one another and broadens our experiences of social living,” she said. Cavanaugh also described the young people present as “our greatest asset.”

Rev. Lourey Savick, the pastor of the United Parish of Upton, told the audience that she has been a participant in the event for years. She remembered a packed auditorium and children trying to get through the crowd during a pre-pandemic ceremony. She lamented the distance that COVID-19 has placed between people now, both physically and emotionally.

“This same spacing out for you in this room has happened for us as well,” she said poignantly as she noted that several places of worship have had to close their doors. “We have been through much in these communities. But that does not mean that the faith does not continue, continue to drive us forward and inspire us for the future.”

She noted King’s work toward freedom and justice but stressed that his dream has yet to be realized in our society on either a small or large scale.

Town Clerk Connor Degan noted that he first participated in the interfaith event seven years ago. He said when he was younger he did not realize what the building was. Now, he said he enjoys the sense of connection he experiences with the people who worship here.

Everyone present displayed the common trait of kindness, Degan stressed, which is a community builder. He also noted that King’s focus on justice is also “a central tenet of Islam.”

Select Board member Shahidul Mannan, an immigrant from Bangladesh, noted that his presence as a public official “is a testament that we have come a long way in the journey of Dr. King’s dream.”

Said Mannan: “We are here today not only to celebrate but also to commit ourselves to the same cause and to following [King’s] path in today’s world, in today’s context, and towards a new set of struggles toward equality and justice.”

He added that King’s dream has not yet been fully realized, and the struggle sometimes seems like “a never-ending journey.” He noted the pain caused by the shooting of Asian participants in a Chinese New Year celebration in California the day before.

“We cannot be complacent with our progress,” Mannan said, “as we only have complex and often daunting work to do. … Let’s keep working and dreaming towards equality and justice for all through our own little ways.”

State Rep. James Arena-DeRosa said Hopkinton likely is the most diverse of the towns he represents, calling it “a model” for the state. He noted that this holiday is different from all the other ones celebrated in America because it stresses the joint values of economic and social justice.

“Of course, it’s not just about one day,” he added. “It’s about what we can do every single day in our lives and in our communities in service to others.”

He described his prior work with the Peace Corps and Oxfam, where he worked with “cultures from all around the world.”

Said Arena-DeRosa: “I truly believe that, if we continue to dream, our diversity can be our greatest strength.”

Student performances evoked smiles from the crowd. Younger children sang a song about King to the tune of “Bingo.” Each one held a letter that together spelled out King’s philosophies of unity, peace and faith. Older students performed a skit that focused on gender discrimination in the context of a basketball game. After the event, these students could be seen shooting hoops together outside, showing the same spirit of unity that King embraced.