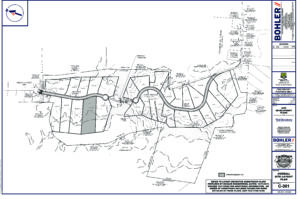 The plans for the Chamberlain/Whalen development continue to be discussed.

The Conservation Commission at its meeting Tuesday continued several subdivision requests on the Chamberlain Street/Whalen Road parcel until April 6, requesting in each case that the work be moved further away from the buffer zone boundary.

The property is where Chamberlain Street and Whalen Road — both dead-end streets — are to be extended, in the area behind the schools complex. Five of 29 lots were under consideration for the construction of single-family homes. Notices of intent had been filed for Lots 6, 12, 14, 24 and 26.

John Cusack with Bohler Engineering spoke on behalf of the applicant, home builder Toll Brothers, in each case. The roadway on Chamberlain has been constructed and paved for this longstanding project, he noted. Infrastructure work has commenced on the Whalen Street side as well.

Cusack explained that the project has gone through some modifications, at the commission’s request, since previous meetings.

“When we first started the project, if you recall, I think it was, we had 32 lots, of which 17 had foundations that were in the 100-foot buffer,” he explained. “When we talked to the commission, you asked us to take a much closer look at that and see what we could do to minimize the amount of structures within the 100-foot buffer.”

The project now has 29 lots with all but one house foundation within the 100-foot buffer zone, according to Cusack. He noted that these five lots are the ones currently under consideration, as Bohler is seeking to know “what the commission would be looking for so we could incorporate those changes into the future filings.”

Chair Jeff Barnes said he would like to see a cumulative impact assessment from Bohler.

“The commission wants to see all the lots in one big plan and all the disturbance you’re going to have on all the 20 lots,” he noted.

Lot 6 is on the westerly side of Chamberlain Street, about midway down the road. The single-family house is proposed to be a walk-out, with grading proposed to be no closer than the 50-foot buffer zone. At every 40 feet, there will be permanent immovable barriers (PIBs) for flood protection.

There is a dual line made up of a silt fence and a compost sock to prevent environmental disturbance.

Commission member Jim Ciriello said he would like to see the design be “a little tighter,” with the plans pulled further away from the buffer zone. This was a common theme for the remaining parcels.

Conservation agent Don MacAdam added that some of the land could be allowed “to grow a little wild,” which would allow for flood control while removing the need to mow it.

Lot 12 was the only parcel with a single-family house within the 100-foot buffer zone. Cusack explained that there was “no option” for it to be pulled outside because of the configuration of the lot. PIBs are proposed along the entire perimeter.

“This to me is a non-starter in my head, given how much is in the 100-foot [buffer],” commission member Ted Barker-Hook said.

“I think it’s important to remind the commission of the efforts that the applicant has done to work with the commission to reduce the density of the project and to pull things outside of it,” Cusack said when asked about a variance. “I think the developer made some pretty significant concessions by reducing 10 percent of the development size. This one, there just isn’t anything to do.”

“This could be the hardship,” Ciriello said.

This is the smallest house of the project, Cusack noted, at about 3,000 square feet of living space.

Lot 14 is on the eastern side of Chamberlain. It is outside of the 100-foot buffer zone. Cusack said before comments that his team could “tighten that up.”

Melissa Recos asked about the soil quality. Cusack explained that it was “pretty lousy actually” because of its poor drainage permeation. On this lot, a septic system was considered.

Barker-Hook asked that the driveway be moved to the north of the property and away from the 50-foot buffer zone, and Cusack agreed to consider it.

Lot 24 was the only lot considered on 0 Whalen Road. This project is at grade. It is unique because the wetlands are higher than the house, so swales will divert the water from the house. PIBs at the rear of the house are consistent with other lots. Cusack said he will try to pull the boundaries back at this site as well.

“It was always understood that it was kind of a strange wetland,” Cusack said, noting that in this case the water would not drain into the wetland but into a street drainage system.

Lot 26 also is on Whalen Road. This lot is outside of the buffer zone but in a more jagged shape. The comments were similar.

Barker-Hook noted that this particular lot “has a tremendous amount of side yard.” He added that he was going to be wary of any development close to the buffer zone.

“We are working with an incredibly extensive wetlands network,” Barker-Hook stressed regarding the entire subdivision project. “I just want to put it out there that I’m going to be very protective because of the extensive nature of the wetlands that are surrounding it. It’s going to be hard to sway me away from that.”