Through his business, Foster Custom Furniture, Hopkinton resident John Foster has created pieces of furniture for members of the community as well as institutions that keep Hopkinton vibrant. Among his notable pieces are an altar and pulpit for Saint John the Evangelist parish, a display cabinet and time capsule bench for the Hopkinton Public Library, and a roll-top bench located at the Hopkinton Center for the Arts.

The Conservation Commission at its meeting Tuesday continued several subdivision requests on the Chamberlain Street/Whalen Road parcel until April 6, requesting in each case that the work be moved further away from the buffer zone boundary. The property is where Chamberlain Street and Whalen Road — both dead-end streets — are to be extended, in the area behind the schools complex.

Local resident and researcher David Cormier appeared before the Historical Commission at its meeting on March 2 seeking its assistance in preserving Old Town Road, which was first documented in 1732 as a dirt road. Cormier began researching the history of the road as part of his research on Lake Maspenock, he explained. It served as the original cart path that early settlers used to travel between Hopkinton and what is now Milford.

Select Board chair Brendan Tedstone on Tuesday sent a letter to Greek ambassador Alexandra Papadopoulou on behalf of the town, recognizing Greece’s 200th anniversary and commending the Greek-American community “for its contributions to the Commonwealth of Massachusetts and to the United States, and its role as a bridge between the two nations.”

Local students continue to impress at the collegiate level, and our latest edition of College Honors recaps many of those who were recognized for academic achievement in the fall semester.

Photo of the Day: The winner of this week’s Hopkinton Independent/Bill’s Pizza photo contest is Doug Hudson for this photo of merganser ducks at Lake Whitehall. 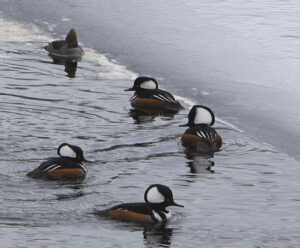