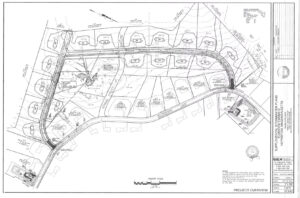 Representatives for the developer of the proposed Elmwood Farms III residential subdivision off Blueberry Lane appeared before the Conservation Commission at its meeting Tuesday night, looking to move forward a project that was first introduced more than three decades earlier, but they found it difficult to agree on a key point.

The proposed 24-lot development is on the south side of Blueberry Lane, abutting Marathon School and EMC Park. Abbott Realty Trust is the developer.

Tuesday’s discussion focused on water drainage concerns, and there was some disagreement regarding the standards the project should be using. Specifically, GLM Engineering, representing the developer, used old data regarding average rainfall depth when creating a model to reflect proposed runoff volumes and peak discharge analysis. BETA Group, the town’s engineering consultant, commented that the plan should be updated to the current standard as per the town’s bylaw, which reflects a higher volume of rainwater.

Conservation administrator Don MacAdam noted that the project was approved by the Planning Board in 1989, but it had not come before the Conservation Commission until recently.

Said Conservation Commission chair Jeff Barnes: “I understand it’s been under litigation for whatever reason. To Don’s point, this is coming before the commission now [for the first time]. Engineering this to standards that are 30 years old or 20 years old, it’s not going to work for us.”

Rob Truax from GLM Engineering defended the proposal, stating: “We’re not engineering it to the standards that are 30 years old. We’ve gone through the stormwater regulations. We’re not doing it to your stormwater bylaw.”

Countered Barnes: “Well, that needs to be done.”

Truax suggested getting counsel to weigh in, saying: “My understanding of the bylaw, though, is it states that if the subdivision was approved by the Planning Board — it doesn’t state dates, it just says if it was — then this doesn’t fall under that.”

Board member Melissa Recos, who specializes in stormwater engineering in her job with BETA, also questioned the approach to base an analysis on data that was updated years ago.

“Currently we require all of our developments to follow the new rainfall data and such,” she said. “I think there was a condition in the order of conditions where they’re valid for two years before you start construction. I think the intent of that is for projects like this, where things change over time. I would expect any development in town to go by the new standards. Rainfall changes, development changes, a lot of things change.”

Meanwhile, a group of Blueberry Lane residents (Elmwood Farms I and II subdivisions) sent a letter to the commission last August expressing concern about the effects of the development on their properties, many of which have dealt with longstanding drainage issues due to, the letter states, “the flow of water towards our street, poor soil quality, and the deficient original grading of existing lots.”

“The residents around this subdivision have had issues with stormwater problems,” Barnes said. “There’s a high groundwater table at the site. So the conditions there currently aren’t ideal to begin with. And to design this to some standard that is out of date to me just doesn’t seem reasonable.”

Concluded Barnes: “You guys can engineer it to the standards that you want, and then we’ll review it and we’ll see where it goes, I guess.”

Looking at the overall project, Truax noted the plans have been updated since the last presentation.

“We feel it’s a good plan now,” Truax said. “It’s better than what was approved. We’re doing water quality treatment, we’re getting all the treatment we need, we’re going to improve the existing drainage basins. … We think these are good improvements. We think it’s definitely a much better plan than we started with.”

The new plan also eliminates one of the three proposed roads (Adams Street) and some house lots, although it was not clear precisely how many homes were removed. The new plan appeared to show 17 proposed homes, although some additional lots were visible without a designation. Truax said he would submit a revised plan with more detail after consulting with the developer.

The discussion was to be continued March 9.