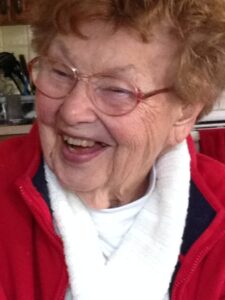 Marie T. Creedon (Kelley), 95, of Milford died comfortably and peacefully at home surrounded by her family on Feb. 7. She was the devoted wife of 34 years to the late Richard J. Creedon.

Born Dec. 7, 1925, in Natick, the daughter of the late Leon E. and Agnes C.(McCarthy) Kelley, Marie was raised and educated in Hopkinton and Wellesley. She was a graduate of Dana Hall School in Wellesley and she received her Bachelor of Arts degree from Regis College.

Marie’s love of United States and world history led to a career as a middle school social studies teacher. She dedicated many years to the Milford Public Schools system, teaching her favorite subject and actively participating in the annual school trips to Washington, D.C. After retiring, Marie enjoyed many happy years of traveling worldwide and vacationing on Cape Cod. However, treasured time spent with her family was most important to her, especially with her cherished grandchildren.

A deeply committed Catholic, Marie was a parishioner of Sacred Heart of Jesus Church in Milford. At her parish, she was a member of the Sacred Heart Women’s Club and Mother’s Day Rose Drive committee, a religious education teacher and a Eucharistic Minister, dedicating countless hours bringing communion and companionship to the sick and homebound. Marie had a particular devotion to the Blessed Mother and the rosary, which she prayed daily after morning Mass. She was committed to many religious and charitable organizations such as Problem Pregnancy, Massachusetts Citizens For Life, America Needs Fatima and the Maryknoll Missioners. In addition to her humanitarian efforts she had a strong interest in the local political community.

Marie is survived by five proud children: Mary E. Creedon of Plano, Texas; Richard P. Creedon and wife Lynn of Vernon, New York; Marie B. Creedon of Milford; Christine M. Creedon of Milford; and Kathleen M. Pacella and husband Peter of Milford. Marie was predeceased by daughter Karen L. Creedon. Marie was also a loving and devoted sister to the late Leon E. Kelley, George T. Kelley and John X. Kelley, M.M. Also surviving are her four adoring grandchildren, Shannon Ferguson and husband Tyler of Fairport, New York, Daniel and David Pacella of Milford, and Lucille Creedon of Milford, along with her two great grandchildren Kian and Ruari Ferguson of Fairport, New York, as well as many nieces and nephews.

Arrangements are under the direction of the Consigli-Ruggerio Funeral Home, 46 Water St., Milford. Funeral services and interment on Feb. 13 are private. In lieu of flowers, donations in Marie’s honor may be made at maryknoll.org.