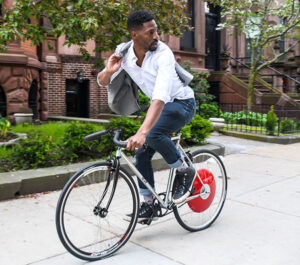 The 1854 Cycling Company plans to open a manufacturing facility at 80 South Street, and its owner appeared before the Select Board on Feb. 4 to share information about his company’s strategy of employing former convicts and discuss his intent to apply for the Massachusetts Economic Development Incentive Program (EDIP) and obtain a Tax Increment Financing (TIF) agreement in Hopkinton.

Founder and CEO Brandale Randolph said his background is not in bicycles or motorcycles but non-profit work, and he started the company in Framingham in 2016 “simply as a place that would provide employment for formerly incarcerated people.”

The minority-owned, privately held, for-profit LLC — named for the year in which the Massachusetts Anti-Slavery Society organized a protest in Framingham — went from building single-speed bikes to making electric bikes. Then, after being accepted into the MassChallenge business accelerator program in 2018 and partnering with larger corporations, the company developed a tactical bicycle used by police officers — a $10,000 bike that includes an electric motor, a flat-panel touchscreen monitor over the handlebars, integrated radios and body sensors.

Seeking a facility that can mass produce carbon fiber to meet its demand, the company settled on the South Street location.

“Our growth has been rapid,” Randolph said. “There will be no bicycle like this in the world, that we can produce. And the space that we need can only be found at a place like 80 South St.”

In a letter to the town, which followed a Jan. 9 meeting with town executives, Randolph stated that the building, currently owned by Dell Corporation (formerly EMC), provides the space his company needs for training, offices, research and development, manufacturing, cafeteria and child care, as well the opportunity for expansion. He said his company planned to invest more than $13 million in renovations and equipment.

Randolph said moving forward the company would like to transition to motorcycles.

“Our goal in the next five years is actually to compete directly with Harley-Davidson,” he said. “We would love to produce motorcycles and motorcycle chassis using some of the same technology of communications between bicycle, officer and its vehicle. We have the engineers and the other backing from other companies involved that we believe this is going to be very possible within the next few years. However, our growth is predicated on having a building such as the one as 80 South St.”

Randolph said he anticipated 42 employees to start — of which 16 would be individuals who were formerly incarcerated — with the potential to increase to about 150 employees in a few years.

Responding to concerns raised by Select Board chair Brendan Tedstone about what type of individuals might be coming to town, Randolph said that the employees would go through background checks including CORI-clearance, and ex-cons with a history of violent transgressions — especially toward women and children — would be excluded. He acknowledged that “certain individuals we cannot have” due to concerns about how they might negatively affect the company’s culture or put others at risk, although he was hesitant to make blanket statements about which types of people would or would not be considered.

“We don’t want to bring in employees who may be a danger to other employees within the organization,” he said.

Herr said he feels the town would be supportive of the company’s approach.

“There’s been a lot of talk about protecting the community, and I think that’s all very warranted and we’ll make sure that happens through the TIF, but I also think that Hopkinton is the kind of town and the types of people that want to give others a second chance, want to give others a third chance in life,” Herr said. “We all make mistakes in life, I think our community recognizes that as a whole, and I think that our community would — as long as it’s safeguarded — welcome the opportunity to be part of the process that does give people a second chance. I feel that way, and I think a lot of people would agree with that.”

Herr noted that the town has had mixed results with TIF agreements in the past, sometimes losing a significant amount of money.

“In general, TIFs, if done the right way, can benefit both parties,” he explained to Randolph. “We want to support businesses coming to town, and we want to support you with some kind of TIF, but we have to have it be a sort-of partnership.”

The board approved by a 4-1 vote (Tedstone voting against) allowing the town manager to begin discussions about the EDIP and TIF while seeking clarification about the hiring process regarding ex-cons.