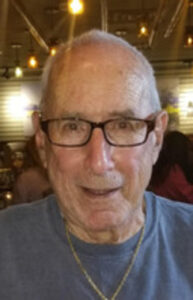 David was born Aug. 27, 1933, in Browns’ Square in Ipswich. He was the fifth of seven children born at home to the late Joseph A. and Edith M. (Robicheau) Clements.

David was a true Ipswich native and dedicated his life to his family and community. David attended Ipswich Public Schools, graduating with the class of 1952. He then went on to Beverly Trade School, where he honed his skills as a first-class tool and die machinist. He began his career at United Shoe and completed it at Beverly Pattern, from which he retired in 1995, freeing him to pursue his true passion of service to his community.

Throughout his life, Dave was fondly known as “Cy” to his friends and family. He was everyone’s go-to guy, the one who was always there for you. No ask was too big and no favor was too small for Dave to drop what he was doing to help out.

Dave’s love of community was evident in his role as a call fireman and later the auxiliary police, where he was awarded the rank of captain. Having fully embraced the motto of protect and serve, Dave later stepped into the role of director of civil defense for the Town of Ipswich. Dave took on this nascent program; when faced with the Blizzard of 1978 he mobilized the town’s response. After years of heading up emergency management in Ipswich, Dave joined the Massachusetts Task Force 1 (MA-TF1), a division of the Federal Emergency Management Agency (FEMA). It was with his FEMA family that Dave continued his service to community and country as a first responder on 9/11. At 68, Dave was the oldest member of FEMA working search and rescue for two weeks at the World Trade Center.

Dave’s love of community was surpassed only by his love of family. A true patriarch, he stepped in as head of the family when his father died at an early age, becoming the surrogate father and mentor to his five sisters, brother, mother and 17 nieces and nephews. As a father, he was the loving disciplinarian who instilled a sense of responsibility, obligation and accountability. He approached life with a pragmatism and level of organization that was both impressive and comedic. He was a proud grandfather who would bend strangers’ ears with his tales of his six grandchildren’s accomplishments.

In addition to Ursula, his loving wife of 60 years — the girl he married while waiting for a bus in New York City — he is survived by a son, Joseph P. Clements and his wife, Veronica, of Hopkinton; a daughter, Janice Clements-Skelton and her husband, William Skelton, of Ipswich; and six grandchildren, Maxwell Clements of Boston, Alexander Clements of Hopkinton, Margaret Clements of Hopkinton, Emily Skelton of Medford, Abigail Skelton of Boston and Wm. Vincent Skelton of Ipswich. He also is survived by two sisters, Doris (Lemieux) Banks and her husband, Earle, of Ipswich, and Rosemary Whynott of Gloucester; two sisters-in-law, Marie Gionni and Maureen Della Rodolfa, both of New Jersey; his treasured cousin, Lester Mountain of Fort Myers, Florida, and Nova Scotia; his devoted canine companions, Chloe Bell and Gracie; and many nephews and nieces. He was predeceased by brother Roland Clements (formerly of Ipswich) and sisters Ruth Rawson (Rowley), Lorraine M. Clements (Ipswich) and Charlotte Durkee (Georgetown).

His funeral service was held Oct. 30, graveside in the Cowles Memorial Cemetery in Ipswich. Arrangements were under the direction of the Whittier-Porter Funeral Home of Ipswich (whittier-porter.com). Memorial contributions in his name may be made to The Masonic Scholarship Fund c/o the John T. Heard Masonic Temple, 70 Topsfield Road, Ipswich, MA 01938.