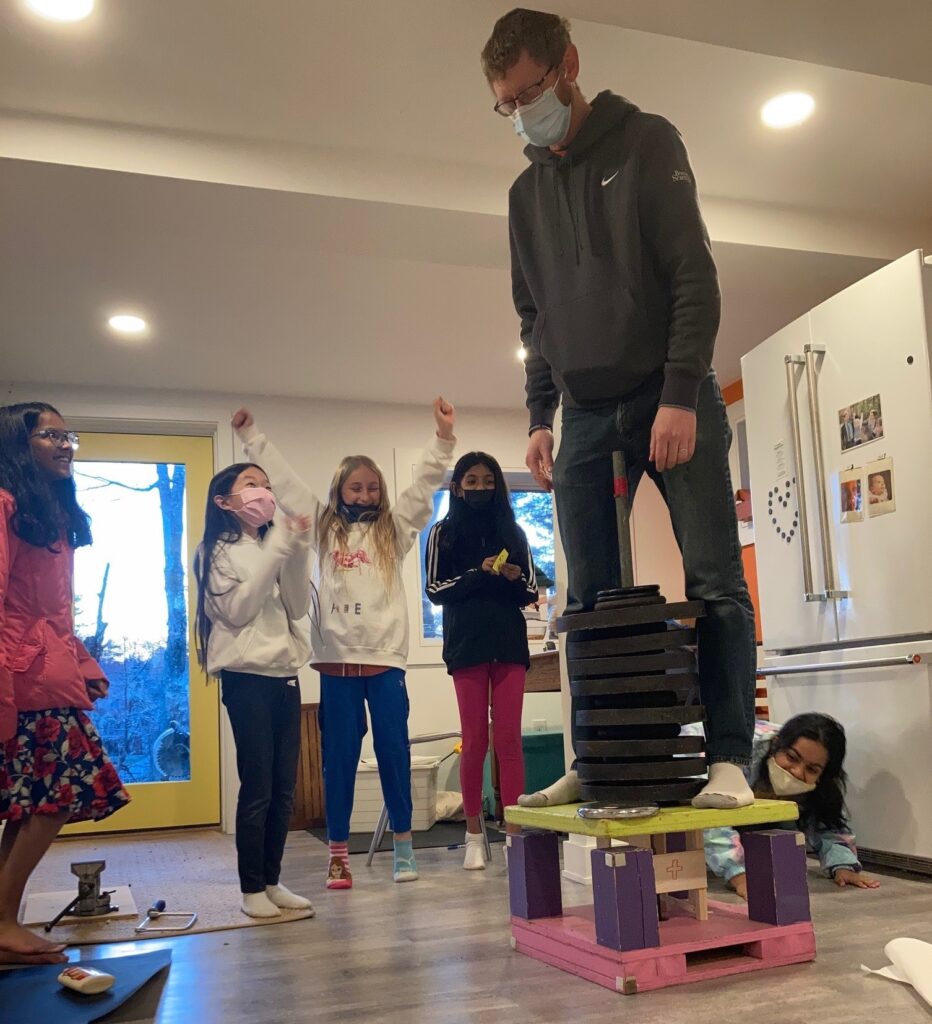 A five-member team of Hopkinton fourth-graders qualified to compete at the Global Finals for Destination Imagination, to be held in Kansas City from May 21-24.

Founded in 1999, Destination Imagination is a volunteer-led, educational nonprofit organization that teaches 21st-century skills and STEAM principles to kindergarten through university level students through creative and collaborative problem-solving challenges.

In their second year together, Dolphin Girls, comprised of Naeva Benning, Julia Wu, Srinika Katta, Ruthie Philip and Nikita Nadgir, tied for first place at the state level in the Roll with It challenge along with an additional Instant Challenge.

Team manager Chris Benning explained that the girls spent months researching, planning, testing and rehearsing for the event without any interference from grown-ups. As manager, he said, he can help keep the team on track but is not allowed to assist with the solution.

The group had to build a structure that is as light as possible using only wood and glue. It has to roll down a ramp, hit a pole and then hold as much weight as possible. The challenge also involved creating and performing a skit that describes how a character becomes a legend. The testing of the structure is integrated into the story, as is a rotating object designed and built by the team.

Benning said it has been rewarding to witness the Dolphin Girls in action, especially considering some of them didn’t know each other before teaming up. DI is not a school activity. The kids meet once per week for 90 minutes and many more hours as the competition gets closer.

“It was a wonderful chemistry,” he said. “They are very supportive of each other and know how to laugh together but also get work done.”

His daughter, Naeva, agreed. “I liked putting all the brains together to make the team work,” she said. In addition to teamwork being a key element, she said research is “super important so that you can understand all the details.”

When Chris Benning was a youngster, he competed in an earlier version of Destination Imagination and also helped with his older son’s team a few years ago.

Having to step back as a manager and be hands-off can be “nerve-wracking” he said, although he can show the kids how to use power tools and offer safety tips, for example. Otherwise, it is up to the team, through trial and error and experimentation, to figure out why something is not working and devise other ways to achieve success.

“As a parent, it’s so cool to watch,” Benning said. “This team had each other’s backs when things weren’t working” and didn’t give up when the structure failed and didn’t do what it needed to do.

“We get to be ourselves and enjoy the process of our creations being built together,” noted team member Philip.

Part of the competition also involved two team choice elements. Benning said his team likes to make props and costumes and created their own cell phone, microphone and cards when performing a skit about COVID-19.

Wu said she learned how “building and acting” can go together and said that “creativity” along with working within time constraints led to the group’s achievement.

Of the legend skit, Nadgir said, “I learned that everyone can be a legend even if you are not a super famous person.”

The last quarter of the score is based on the Instant Challenge where the team members walk into a room with no idea of what they will be asked to build or asked to improvise a performance, Benning said.

Hopkinton DI coordinator Anne Vergnon said her role includes managing team registrations to DI, promoting the program via Facebook (Hopkinton-Destination-Imagination-308642499290034) and at other activities in town and regularly interacting with other coordinators across the state.

She said that DI is “a fun, creative and safe activity.” Because there is no adult interference, kids are allowed to “freely experience the creative process, improve their critical thinking and collaborative problem-solving.”

Vergnon noted that Massachusetts is one of the most active DI states, with more than 400 teams and 2,500 participants. DI attracts about 150,000 participants and 38,000 volunteers worldwide, representing 45-plus states and 30 countries.

In Hopkinton, there typically are 12-15 teams, with four or five teams qualifying for the state tournament and one or two qualifying for the global event, she said. (Anyone seeking more information can contact her at annelittlev@yahoo.com.)

Katta encouraged other kids to give the activity a try, especially if they like STEAM areas — science, technology, engineering, art and mathematics. “It’s a great way to make friends,” she added.

In addition to the competition, Benning said the children are looking forward to watching fellow participants in action, meeting kids from around the world, attending a style show of products and costumes and enjoying a movie night.

There also will be learning sessions and an opportunity to trade pins from their state with competitors from all over the world.

Members of Dolphin Girls (“We all like dolphins and we’re girls, hence the name,” said Katta) took away more than STEAM knowledge from their participation.

Philip said she always strived to make everything perfect but this project taught her it’s OK to “Let it go,” when things are not.

“Sometimes, you just have to go with the flow and be content that you have given it your best,” she said.

← Arrests/Police Log, May 17 edition Sokol takes shot at NFL after signing with Vikings →