Sokol takes shot at NFL after signing with Vikings 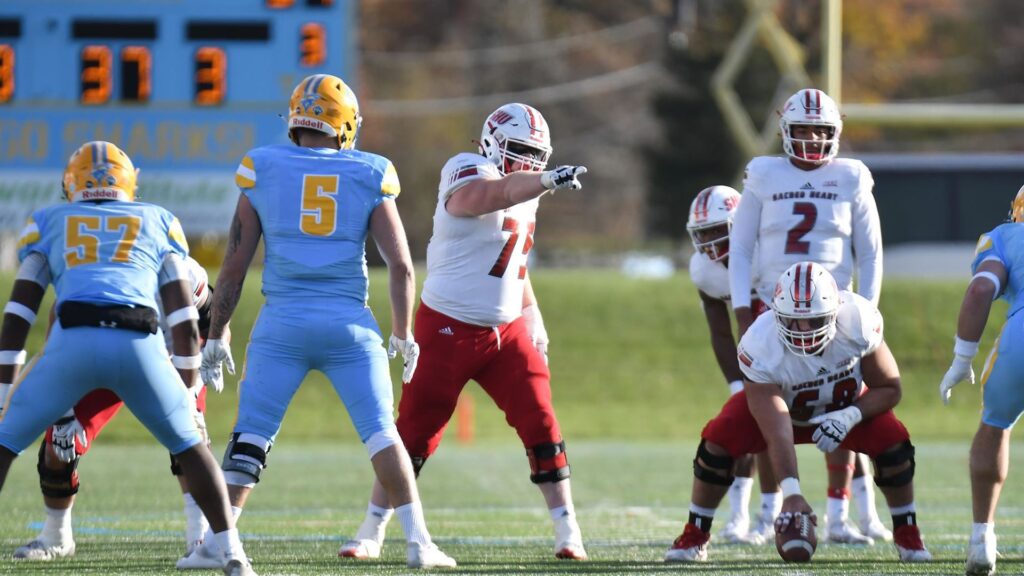 Hopkinton’s Josh Sokol (75) is trying out for the NFL’s Minnesota Vikings after a standout college career as an offensive lineman at Sacred Heart University.
PHOTO/SACRED HEART ATHLETICS

The NFL Draft had come to an end April 30 when Josh Sokol received a call from his agent asking whether he would be interested in signing with the Minnesota Vikings. The 2016 Hopkinton High School graduate thought he might be getting an opportunity to go to Minnesota’s rookie minicamp, and said he would be interested.

“[A team representative] called me and said, ‘Do you want to be a Viking?’ ” he recalled. “I said, ‘Absolutely,’ and that was about it.”

Sokol described the entire moment as “surreal,” and his head was so in the clouds that he still can’t quite remember who it was on the other end of the phone. It didn’t matter, all he knew was that he was going to have a shot to achieve a lifelong goal.

“It was the call I had been waiting for for the past 12-14 years,” Sokol said. “Everyone dreams of having the opportunity to play in the NFL. But for me, being an undrafted guy, nothing is solidified.”

Sokol didn’t have to wait long for his phone to start buzzing after word got out that he was going to sign as an undrafted free agent. He jokingly said it was a little obnoxious that night and he could barely use his phone because it buzzed repeatedly. He estimated that he received about 350 calls or text messages congratulating him.

“It was insane,” Sokol said. “I was on the phone with the team at 9:30 and people kept calling me, and I almost hung up on the team because I couldn’t decline the calls fast enough.”

Last fall, as a graduate student at Sacred Heart University, his third year as a team captain, Sokol was a standout on the offensive line. He helped Sacred Heart establish a dominant rushing attack that ranked 11th in the Football Championship Subdivision (FCS) at 211.1 yards per game.

The Pioneers won their second straight conference championship and advanced to the FCS playoffs.

“When Sokol gets into camp with the Vikings, he is going to turn some heads,” Sacred Heart coach Mark Nofri said. “You’re not going to find a smarter football player who is dedicated to winning and getting better every day.”

A 6-foot-2, 309-pounder, Sokol was named to the FCS Athletics Directors Association Academic All-Star Team. He carried a 4.0 grade point average while studying criminal justice. He earned a pair of Tri-Valley League All-Star nods during his time with the Hillers.

“We were very successful, we produced three championships in six years and I don’t think that has been done before in school history,” Sokol said, adding that being an FCS player competing for a spot in the NFL puts a “target on his back.”

“Fans and analysts and anyone who follows their professional team, they want to know, ‘Why are we giving this kid a shot?’ ” he said. “But the FCS can play.”

Sokol was to report to rookie minicamp May 13 at the Vikings’ practice facility in Eagan, Minnesota, to begin the work of trying to earn a spot on the roster. He planned to bring that small school mentality to the highest level.

“That’s what makes us who we are,” he said. “I am going to continue to do the work and show up every day and be consistent. It’s tough, anyone can get cut at any time, that’s how the NFL works. I’m going to try to stay healthy and compete. That’s all I can do.”