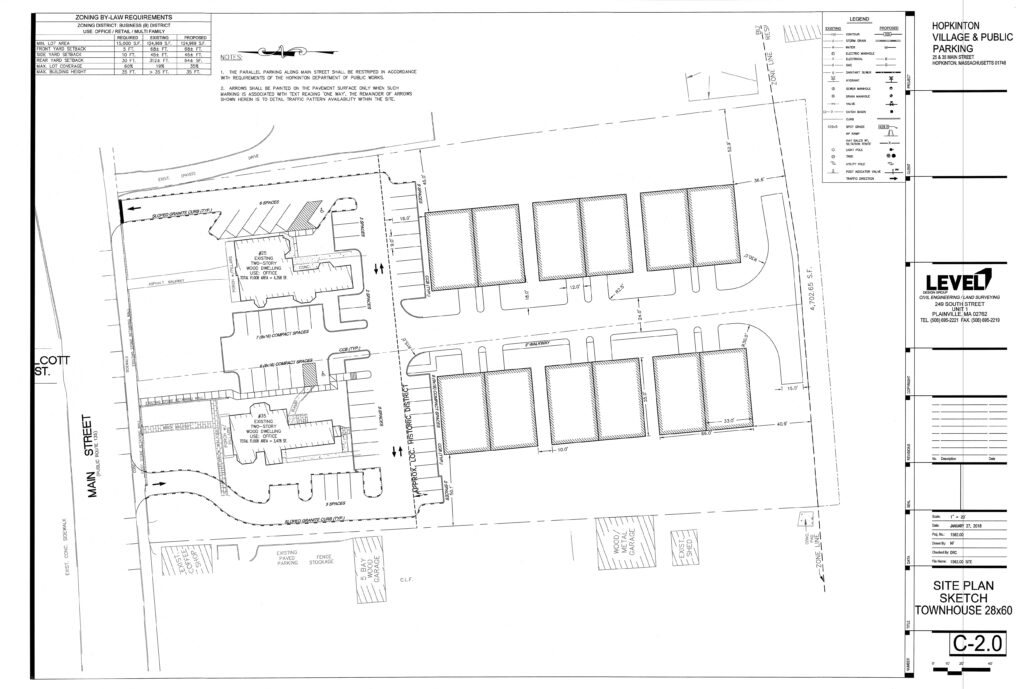 This design provided by developer Chuck Joseph shows where his group would like to build condominiums (the 12 rectangles on the right) and provide parking for town use around the existing mansions on Main Street.

Developer Chuck Joseph appeared before selectmen at their Dec. 18 meeting, seeking the board’s support for a public/private co-venture that would help to solve the town’s downtown parking issues.

Joseph presented a concept plan for the Hopkinton Village Center project, located at 25 and 35 Main St., which proposes to build six buildings, with two units per building, for a total of 12 condominiums. In addition to parking for the use of the condominium owners, the concept plan includes a 32-space municipal parking lot with a preliminary estimated development cost of approximately $500,000; a cost to be borne by the town in exchange for the gift of the land on which it will be built.

The current property has three driveways leading out to Main Street, one of which Joseph said will be eliminated and replaced with a lighted walkway to the municipal lot.

Understanding that the funding to construct the parking lot will need to be approved by Town Meeting, Joseph said it would be helpful to know beforehand if the project had the support of the selectmen. With respect to timing, Joseph hoped to move the project forward ahead of the downtown corridor project and is tentatively seeking funding approval at the May 2019 Annual Town Meeting.

John Coutinho was happy to see a proposal aimed to improve downtown parking, saying he had been asking about parking for the last three to four years.

Added Irfan Nasrullah: “I think it’s a fabulous idea that private parties are stepping forward to try to alleviate some of the issue that the town is experiencing.”

Selectmen Chair Claire Wright questioned why the project did not include a commercial component, citing a previously approved plan by another developer that included a 45,000-square foot, three-story mixed-use building with retail, office and condominiums.

“We decided to move in a different direction,” said Joseph, explaining that they had looked hard at the plan, incorporating their knowledge of the town, and decided a less dense use of the property would be more successful. According to Joseph, the current downtown now has a cultural focus, with the more functional development shifting to the 495 area. And while he recognized that there is not a lot of commercial space in Hopkinton, a commercial development at 25 and 25 Main St. would face challenges in terms of traffic and use.

Wright also said she currently sees a lot of empty spaces downtown near the town common or in front of the police station and felt that many people are not willing to walk short distances and would therefore not use the municipal lot.

I’m not sure I agree that people would not use the parking lot,” said Joseph.

In the end, the Board of Selectmen unanimously voted “to support the idea of exploring a public/private partnership regarding Hopkinton Village Center that results in a public access parking lot in the area reviewed, with the assumption that the normal development process will be followed, and the end goal is to increase parking downtown.”