There are a lot of stories to share in this town, and I’m sure most of them are more interesting than mine.

So, I’ll make this introduction quick. I’m the new editor of this newspaper, and I look forward to continuing the tradition started by former publisher and editor Sarah Lothrop Duckett while incorporating some new ideas and techniques to bring items of interest to this thriving community.

Those of you who know me from running the youth basketball program in town or coaching in one sport or another might not know that journalism is my profession. And while I’ve been an editor and writer for some major media outlets, I never enjoyed a job more than when I was editor of a local newspaper’s sports section in a nearby town almost 30 years ago.

There’s something special about a local newspaper. There’s more accountability, because it’s more personal to the readers. And I welcome that. Feel free to reach out to me with any thoughts about something you’ve read — or would like to read.

We know everyone is busy, and we thank you for setting aside some time to flip through our pages. I hope we can continue to make it worthwhile.

Mindful of their well-being

Apparently there are a lot of Hopkinton parents whose goal for the new year is to cut down — or at least better manage — the stress in their lives. How else to explain the popularity of the new Mindfulness for Wellbeing class that starts this month?

Hopkinton Middle School teacher Maryellen Grady offered the free class to all Hopkinton Public School parents, and all 70 spots filled up surprisingly quickly — in fact, some people had to be placed on a waiting list.

Grady, who has taken two Mindfulness for Educators classes and attended a three-day Mindfulness seminar, will teach the class along with certified mindfulness educator Samantha Harris.

“We will increase our awareness of mindfulness, unpack the stress in our lives, and work to understand the triggers we face each day,” Grady explained. “We will engage in mindful sits, working our way up from 10 to 20 minutes. We will discuss what works and where we may need more strategies. With our focus on our well-being and making that all-important connection back to self, 2019 will be the year we set intentions with full awareness and begin living our best lives.”

Grady said she and Harris will consider doing a second session if the first class goes well.

Hopkinton High School continues to churn out talented lacrosse players. The latest to commit to a Division 1 college program is junior Connor Sullivan, who last month announced that he will play at UMass in 2020. 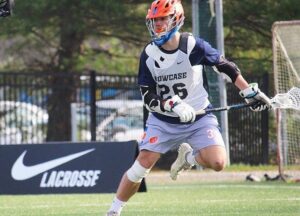 The speedy Sullivan had 30 goals and 14 assists last spring, when he was named Tri-Valley League honorable mention.

Sullivan weighed multiple offers before deciding to commit to the Minutemen, who are ranked 16th nationally in the Inside Lacrosse 2019 preseason poll. He said the location and the academics were primarily what drew him to Amherst.

“I like the coaches, it’s close to home, they have a good business program and that’s I want to do in college, and they’re in the top 20 in the country, so they have a good program,” Sullivan explained. “It was kind of tough [deciding], but when I talked it over with my family it was like, oh, yeah, that’s probably the best one.”

A left-handed attack who also can play midfield, Sullivan said the UMass coaches indicated he could play both positions, “depending on what they like me better as.”

In the meantime, Sullivan has two more seasons to make his mark on the Hillers program.

Of course you are familiar with the Boston Marathon starting in Hopkinton every April, but did you know there is another marathon that starts here on New Year’s morning?

The New Year’s Day (unofficial) Boston Marathon — an informal gathering of long-distance devotees — was held for the 15th consecutive year on Jan. 1.

A group of runners — it’s unclear exactly how many there were, because there is no registration or official timing, and runners don’t even have to start at the same time — took off from the Main Street starting line in the darkness around 6 a.m. A Facebook post at Crow Athletics, which “organizes” the event, shows a picture of 13 runners in Hopkinton, and it reports that the first two finishers crossed the line in Boston in just over 3 hours.

The skating rink sponsored by Parks and Recreation is back at the basketball courts in front of Hopkinton Middle School after operating the last two years at Carrigan Park. 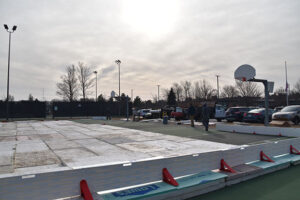 Workers installed the ice rink at the basketball courts in front of Hopkinton Middle School on Dec. 20, but mild weather delayed the rink from opening.

On New Year’s Day, with temperatures in the low 50s and strong winds, waves in the water were noticeable. But with consistently colder temperatures in the forecast for mid-January, the rink should to be open for business soon. Parks and Recreation stressed the importance keeping off the ice if the “closed” sign is up, as attempting to skate on thin ice not only is unsafe, it could damage the expensive liner.

On a side note, the installation of foam panels to balance the rink demonstrates just how much the basketball court is slanted. Anyone who has played there knows it’s an uphill climb going toward the basket nearest the school. Based on the height of the foam from one side to the other, it’s a full foot difference. And no, the street-side basket is not sinking due to all the bricks I have tossed at it over the years.