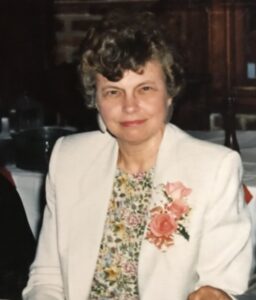 Diane Stowell Duce, 89, of Westborough died peacefully on Nov. 7 in Northborough. She was born in Gardner on July 15, 1932, and was the daughter of the late Stanley Austin Stowell and Ellen (Cooke) Stowell.

Diane was the wife of the late Benjamin Randall Duce, to whom she was married for 56 years.

She is survived by two daughters, Elizabeth (Duce) Sedlins and husband John of Shepherdstown, West Virginia, and Cynthia (Duce) Cote and husband Dennis of Sutton, and one son, Jonathan Duce and wife Linda of Waltham. She is survived by six grandchildren, two great grandsons and nieces and nephews. She was predeceased by her sister, Suzanne (Stowell) Sherwood of Jamestown, North Carolina.

Diane was an active parishioner at St. Paul’s Episcopal Church in Hopkinton. She played the organ on many occasions and was employed as parish secretary. Later, she worked in the Guidance Department at Westborough High School, where she happily interacted with students pursuing college opportunities.

Diane was an avid reader, fond of a good mystery, travel stories and history books. She never missed reading the local newspapers. She was a loyal Red Sox fan her entire life, and Fenway Park was a favorite place along with mid-coast Maine and beaches in the Carolinas. Diane enjoyed art and was a member of the Worcester Art Museum. She loved animals and was an equal partner with her husband in their retirement business of home pet care called Companion Associates.

A memorial service will be held on Saturday, Nov. 13, at 11 a.m. at St. Paul’s Episcopal Church, 61 Wood Street, Hopkinton, followed by a short reception in the parish hall.

In lieu of flowers, memorial donations may be made to an animal rescue organization in your community.

Funeral arrangements are under the care and direction of the Pickering & Son Westborough Funeral Home.