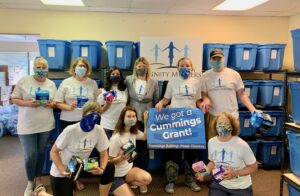 In 2016, Kate Sanetra-Butler had a chance encounter with a woman that would ultimately result in helping thousands of impoverished girls and women with a problem not too many are comfortable talking about — period poverty.

Sanetra-Butler was in Copley Square when a homeless woman approached her asking her if she had a spare tampon. The stranger’s query got Sanetra-Butler wondering if this was a real problem for homeless and in-need females. She began to call homeless shelters and soon learned what an enormous problem it was and continues to be.

SNAP (formerly food stamps) does not cover feminine protection products or underwear, nor are the items typically donated to food pantries, and homeless shelters cannot keep up with the demand. As a result, these women and school-aged girls are forced to use unsanitary alternatives, skip school, or take off from work.

Sanetra-Butler began with donation drives in her basement, which over time evolved into Dignity Matters, a 501(c)(3) nonprofit that collects, purchases and supplies thousands of feminine hygiene products, bras and underwear to disadvantaged women and girls each month.

Recently Dignity Matters received a substantial grant from the Cummings Foundation that will, according to Dignity Matters officer Maureen Winkler Belger, be utilized for warehousing costs. As a result of the funding, the organization now is able to broaden its services and partner with manufacturers to purchase large quantities of items for a lesser price.

“The peace of mind that comes with knowing that the majority of that cost will be covered for the next four years will allow us to put our energy into raising funds and awareness and ultimately serving more women and girls in MetroWest and Greater Boston, providing the free menstrual care they need to work and go to school,” Winkler Belger said.

The organization has a number of local chapters, including one in Hopkinton, which is organized through Facebook and overseen by resident and co-chapter leader Mary Krattenmaker. The Facebook page has more than 200 members to date.

Krattenmaker heard about Dignity Matters through a friend.

“I was fascinated by Kate’s story and knew I wanted to get involved,” she said.

In doing so, Krattenmaker said she learned more and more about the difficulties faced by women dealing with period poverty and the stigma that goes along with it.

“Some women resort to using newspaper or even socks. That was shocking to hear,” she said.

The Hopkinton Chapter organizes two drives annually, in April and October. However, individuals can donate items year round at St. John the Evangelist church, the Hopkinton Public Library or Krattenmaker’s home.

Krattenmaker said many people might be surprised to know that Dignity Matters provides 150 women and girls in Hopkinton and surrounding towns with monthly period protection distributed by Project Just Because in Hopkinton.

“That’s a pretty significant number,” she said. “I was surprised to learn how big the problem is around here.”

Now Krattenmaker is working to organize an online charity auction in September and is in the process of asking local businesses to donate to the event.

There currently is a bill in the state legislature titled I AM. If passed, it will provide menstrual products to all women in prison, homeless shelters and public schools.

To learn more about Dignity Matters, including volunteer opportunities and donations, check out the organization’s website at dignity-matters.org. On Facebook, search Dignity Matters Hopkinton Chapter.

← Hopkinton COVID-19 update for June 15 Letter to the Editor: Markey has 'passion for education' →