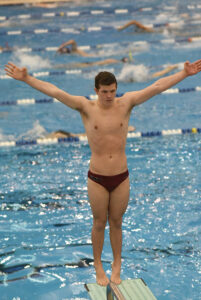 Reece Donahue switched from gymnastics to diving due to a serious health issue, and he has not missed a beat.

When Reece Donahue was 9 years old, he had his sights set on being a gymnast and pursing the sport he’d loved for most of his young life. But a twist of fate led to a terrifying ordeal, and an opportunity to pursue a new sport, one that’s landed him at UMass Amherst as a successful diver.

“I did gymnastics as a kid, but when I was about 9 years old and the workouts starting getting more intense, my heart rate got too high and I would pass out,” Donahue said.

“It was really terrifying,” said Donahue, who would soon learn he had catecholaminergic polymorphic ventricular tachycardia, or CPVT. The condition manifests itself during intense physical activity. so Donahue’s gymnastics career was over.

But not long after, he was watching the 2008 Beijing Summer Olympics and he saw the diving events. A number of aspects of the sport seemed familiar.

Donahue started diving when he was 11 and took to the sport naturally. Because it involves only short bursts of energy, rather than prolonged cardio endurance, he doesn’t have to worry about triggering his CPVT. He started training with Charles River Diving out of Boston and joined the Hopkinton High School team.

Donahue placed second in the state as a freshman and captured the state title his sophomore year. He earned a fourth-place finish as a junior, before missing the state tournament his final year when he had a pacemaker installed in January of 2016.

“Having the pacemaker has made me less afraid of going out and doing new dives,” Donahue said. “Before I had it I was more cautious and afraid to push myself in the pool. But the pacemaker has given me an extra layer of security and I know it’s going to be OK, because I have a bunch of great doctors.”

Donahue also also competed on the AAU circuit, finishing as high as third place at nationals and competing in tournaments all over the country, from Florida to California. His talent led him to the Division 1 UMass program.

“He just brings a good attitude to practice every single day and a good intensity that lifts everyone else up as well,” said Minutemen diving coach Joshua Arndt. “Every day he is striving to be the best he can be.”

Now a junior at UMass, Donahue was hoping to medal at the Atlantic-10 meet and maybe take a run at the NCAA meet during his final year, which will be during the 2020-21 season after he takes a redshirt year next season to further hone his craft and perfect some more difficult dives.

In the meantime, Donahue is enjoying the support of his family, including his parents, Amy and Jeff, and his older sister Amanda, a gymnast herself. He’s getting checkups regularly and taking medications for his heart.

And he’s grateful to be pursuing his athletic dreams, even if they aren’t exactly the ones he had in mind initially.

“It’s pretty cool,” Donahue said. “I thought I was going to be a gymnast. It didn’t work out that way, but I’m lucky to be a diver.” 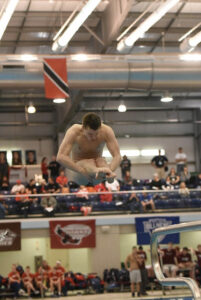 Reece Donahue plans to redshirt next season and then return for a final year on the diving team at UMass.