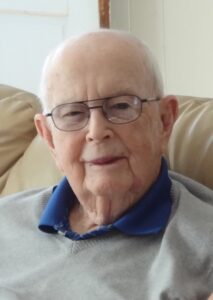 Donald Quentin Sears, 95, of Hopkinton passed away at his home on June 29. Born in Newton, he was the son of the late Edith (Hubbard) and Chester Hunt Sears. He was the beloved husband of 68 years to Margaret “Peg”(Schermerhorn) Sears of Hopkinton.

Don and Peg raised their family in Wellesley, then resided in Holliston for nine years before retiring in Yarmouthport on Cape Cod for 23 years. Donald was a graduate of Phillips Exeter Academy and Harvard University. He served in the Army Air Corps during World War II. Don and Peg loved to travel in the United States and Canada, visiting national parks in their motor home. Don loved family visits, enjoyed woodworking and photography and was an avid golfer, whose favorite courses were the Nehoiden Golf Club in Wellesley and the Kings Way Golf Club in Yarmouthport.

Besides his wife, Donald is survived by his children, Jane Sears Pierce and partner Daniel Goodwin of Holliston, Laura Sears Brady and husband Paul Francis Brady Jr. of Eastham, and Margaret Lynne “Mardy” Sears and husband Venkatesh Gopal of Evanston, Illinois. He also leaves behind his sister, Carol Veum and husband James of Franklin; grandchildren, Christopher Donald Pierce and wife Amanda Elizabeth of Blackstone, Sarah Jane Pierce of Wrentham, and Ashwin Sears Gopal of Evanston, Illinois; and great-granddaughter Penelope Elizabeth Pierce of Blackstone; as well as many nieces and nephews. He is predeceased by siblings Richard, Douglas and Bruce Sears.

A funeral service will be held on Wednesday, July 7, at 10 a.m. at Chesmore Funeral Home of Hopkinton, 57 Hayden Rowe St. Interment will take place on the same day at 2:30 p.m. at Massachusetts National Cemetery in Bourne. In lieu of flowers, donations may be made in Don’s name to The American Heart Association (heart.org).