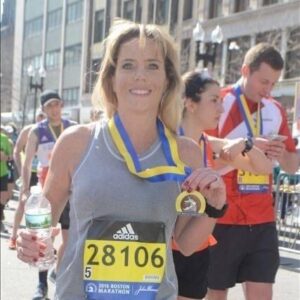 Ann-Michele Dragsbaek will head to the starting line in her hometown to run her 15th Boston Marathon on Oct. 11.

Ann-Michele Dragsbaek didn’t play a single sport in high school. A mother of four, she first started running after having kids. Now, on Oct. 11, she’s set to run her 15th Boston Marathon.

“I had just had my fourth baby,” Dragsbaek says, thinking back to her first marathon. “I was always running for exercise, and people would always say, ‘Why don’t you run the marathon? You grew up in Hopkinton,’ ” she recalls. “I just thought, ‘Oh, I could never do that; it seems so hard.’ ”

Friends and family continued to encourage her, and eventually Dragsbaek gave in. “All right, I guess I’ll try it,” she conceded. “And it just became my thing after that.”

“I felt like I was setting such a good example for my children,” she reflects. “They were all young at the time, and it was my way to have alone time, where I could go out for two hours and just be by myself and work through everything.” Now, training has become “a lifestyle” for Dragsbaek: “I can’t imagine not waking up every day and going for a run.”

The rescheduling of the marathon from April to October has been a challenge for Dragsbaek’s training regimen, which usually takes place over the winter. “This summer, training has been so hard for me … the heat has taken everything out of me,” she says. “I would 10 times rather run in 10 below than in 90-degree weather.”

Dragsbaek is running to raise money for Project Just Because (PJB), a Hopkinton nonprofit that provides food, clothing, household goods and other items to people in need. Over the past 15 years, Dragsbaek has run for several charities, but PJB has been her most frequent charity of choice.

“They do so much to give back to the town,” she says. “Especially now, there are so many people in need.” Every year, if and when PJB receives a charity runner number, Dragsbaek is always the first person they call. “I’m really grateful that they’ve given me this opportunity year after year to run for them,” she says.

Dragsbaek notes that she sees many community members out volunteering with PJB, including her son, who is completing National Honor Society hours at the nonprofit, as well as past clients of the hair salon she ran for 26 years. “I like to give back to the town I grew up in,” she says. “I went to school here. I graduated from Hopkinton High School. I’m a townie.”

When Boston Marathon runners accept a charity number, they are required to raise a minimum of $5,000. “I don’t think that people realize that when we do the marathon, the hardest part is the fundraising,” Dragsbaek says. “It’s not even the training.”

She generally asks the same people each year to donate, and after 15 rounds of asking, Dragsbaek jokes, they all react like, “Here she goes again!” So, when people do continue donating, “it means a ton,” Dragsbaek says, and she wouldn’t have been able to run this many times without their contributions. This year, extra support is coming from her husband’s company, JVT Advisors in Andover, which has pledged to match Dragsbaek’s donations (her fundraising page is: gofund.me/47c3a7f4).

People often ask Dragsbaek how she keeps herself going mid-marathon. “When I’m running, I don’t think of the fact that I’m running,” she explains. “I’m thinking of other things.” Around mile 21 is when it becomes hard, Dragsbaek says; that’s when she starts thinking about the finish line.

“The thing that has gotten me through all these years is just the people cheering us on,” she explains. “Boston is incredible. There are so many people from the start to finish.” Dragsbaek notes that the crowd size may be different this year due to the pandemic, but in past races the experience has generated “a rush of adrenaline as you get near the end, because there are so many people, strangers, cheering you on. It’s very motivating.”

When Dragsbaek does cross that finish line, it feels “surreal. It’s just amazing,” she says. “It always makes me feel emotional at the end of it, especially since I ran in the year of the bombings.” That moment crosses her mind every time she reaches the finish line now. During the 2013 Boston Marathon, the bombs exploded just as Dragsbaek finished the marathon. Her entire family was there cheering her on, and she couldn’t find them for over an hour. “It was truly the most terrifying experience of my entire life,” she recalls.

“But I ran every year since then,” Dragsbaek adds. “I didn’t stop running, so that was one thing they didn’t take away from me from that day.”