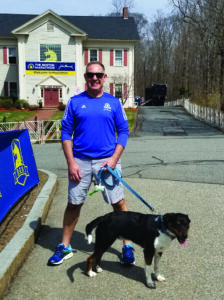 David Pete first ran Boston in 2000 to prove to his wife that he could, and he hasn’t stopped since.

What started as a dare more than two decades ago has turned into a passion for David Pete. The Hopkinton resident was at a friend’s house in late 1999 when the idea of running the Boston Marathon was first discussed.

“Our wives were there and they kind of chuckled to themselves at the thought and said ‘Oh, sure,’ ” Pete recalled. “It really started as a response to our wives wondering whether we could do it.”

“I remember doing some of those initial training runs and getting up to a 10K seemed so daunting,” he said. “I just started building from there and I got hooked on it ever since.”

Pete has been an active member of the Hopkinton Running Club since the beginning.

“Just being in and around Hopkinton and seeing people train every season is always inspiring,” the 56-year-old said. “The camaraderie helps us stay healthy, stay motivated, and have a goal.”

In recent years, he has raced for the benefit of the Wonderfund, a private nonprofit that works with children involved with the Massachusetts Department of Children and Families. The group offers a wide range of services for foster children and their families.

“They provide enrichment, whether it’s sports, music, arts, education, training for if you want to be a lifeguard, all of the enrichment that foster kids need,” Pete said. “Foster parents may not have the funds to do that, and in a lot of cases they don’t because they are raising several foster kids plus their own children.”

The Wonderfund helps pay for those activities and camps, as well as trips to museums, games and other events. Pete learned about the organization when his asset management company helped the group’s founder, Saf Caruso, with a holiday gift drive.

“The tenants in our building got into it and that’s how I heard about it,” Pete said. “It’s really a great charity.”

This is Pete’s third year running for the Wonderfund (gofundme.com/dave-petes-boston-marathon-wonderfund-fundraiser) and he now serves on the group’s board of directors. He said he’s excited to get back out on the road after missing out the last two years.

“I’ve been reflecting on that, it’s almost like after 2014, coming back after 2013 was such a great experience,” he said. “I am hoping for that this year, though part of me feels like next April is the real deal again.”

Pete plans to be out there in April for marathon number 22. And through the years, despite some initial skepticism from his wife, Cheryl, Pete has had no bigger fan.

“She has been supportive every year and always picks me up at the end of the race,” he said.

And, showing the wisdom befitting a man who has been married for 30 years, Pete has a quick answer when asked whether he’s ever been tempted to tell his wife “I told you so” after two-plus decades of marathons and countless miles amassed.