HHS Class of ’23 to benefit from veteran marathoner Longoria 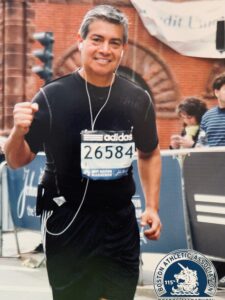 Andrew Longoria is preparing to run the Boston Marathon for the ninth time this fall.

For many people, running is either a hobby or a basic form of exercise. But for 62-year-old Andrew Longoria, a 15-year learning specialist at Hopkinton High School, it’s an escape to balance life.

On Oct. 11, Longoria will run the Boston Marathon on behalf of the HHS Class of 2023.

After receiving race number from the Boston Athletic Association (via the town’s Select Board), the high school sent out a staff email asking for volunteers to run the marathon. Longoria “pounced at the chance.”

“I responded immediately when they put out the email, knowing I would be the most qualified person for this race,” he said.

Longoria has competed in more than 30 long-distance races and will be competing in his ninth Boston Marathon this fall. While he does not have a time in mind for this race, he has set a goal to raise at least $5,000 for the Class of 2023.

With the money, the class will be able to fund events such as prom and senior activities.

“I simply love running for the enjoyment of the event — that’s what accepting the bib was all about,” Longoria said. “The Boston Marathon is unlike any other race in the world. You either have to qualify or fundraise in order to compete in this race, and the environment there is simply extraordinary.”

Longoria first started running after graduating high school in 1977. Initially it was to help manage his anxiety and block out any external problems in his life. He then continued pursuing the sport at a higher level and has stuck with it ever since.

“The older I got, the more I enjoyed the act of running,” he said.

Longoria said his initiative has helped influence family members and others close to him.

“I have such a great support system around me and I am proud to say that running has been such a positive influence on my family’s life,” he said.

That includes his two daughters, both of whom have competed in marathons.

For anyone interested in taking up running, Longoria suggests setting attainable goals before aiming for ultimate events like Boston.

“Always hit the little goals first and start small,” he said. “That way after some time you can work your way up to compete in those bigger races.”