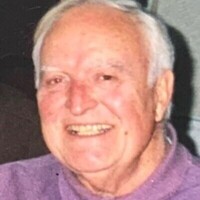 Edward J. Downey of Framingham and Naples, Florida, passed away peacefully at his home, surrounded by his family, on March 10. He was 91.

The son of John and Bertha (Neubert) Downey, Ed grew up in Waterbury, Connecticut. He graduated from Crosby High School and Fairfield University. He was born under a lucky star, and family lore includes many stories of how he won whatever contest in which he was a participant. He was a first lieutenant in the Marine Corps during the Korean War and pulled tough duty in Hawaii, San Diego and Japan; he was on a plane on the way to battle when the armistice was signed. He had a long, successful career with the food brokerage Morris Alper & Sons, where he won most of the office pools.

Married for 63 years to Cecelia (Kakowski) Downey of Thomaston, Connecticut, Ed was a present, engaged and devoted husband and father. He was known for his even temper, calm demeanor, and infectious laugh; he often reminded his children that no matter how bad things seemed, there was always someone worse off than you. A great storyteller, Ed found humor in most things, and once you heard his laugh, you would do or say whatever it took to hear it again. Ed was kind and generous and gave everyone he met the benefit of the doubt. He liked most people but had trouble liking bankers and insurance salesmen. He was intellectually curious by nature and once said that he knew a little about a lot of things. Ed and his wife, Ceil, shared a love of homemade food, the natural world, Boston sports teams and good music — they had a special fondness for Beethoven and owned an outsized bust of him that accompanied them back and forth to Florida. Ed was endlessly entertained by the exploits of his four children and appreciated the fact that they contributed to his collection of stories.

Ed is survived by his wife, Ceil; two daughters, Anne Downey and husband Bob McKenna of Eliot, Maine, and Nancy Downey and husband Jim Kavanagh of Belgrade Lakes, Maine; two sons, Paul Downey of Hopkinton and David Downey of Jamaica Plain; and two grandchildren, Maren and Caroline McKenna of Eliot, Maine, as well as several nieces and nephews. He was predeceased by his two brothers and their wives, Jack and May (Santa Lucia) of Waterbury, Connecticut, and Tom and Arline (Duphiney) of Oakville, Connecticut, and his sister, Bernice Downey of the Maryknoll Sisters of Ossining, New York.

Funeral services and a Mass of Christian burial were private, and entrusted to the care of Norton Funeral Home, Framingham.