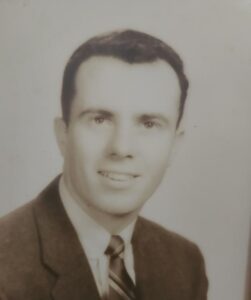 Edward grew up in Holliston. Growing up, he enjoyed working on many farms in Holliston and throughout New England. He was a 1950 graduate of Framingham High School, where he played hockey and football. He attended Tilton Prep School in New Hampshire and was a graduate in the Class of 1956 from Xavier University in Cincinnati. After pursuing Army ROTC in college, upon graduation Edward joined the Army artillery, where he served as a first lieutenant from 1957-59 and in the reserves until 1962. Edward worked as a project manager for the Perini Corporation from 1958-88 in highway/heavy construction, and took pleasure in establishment and coaching of youth hockey for the Hopkinton Hornets. He was a member of Saint John the Evangelist Church in Hopkinton, and after retiring enjoyed volunteering and driving the Busy Bee bus for the Hopkinton Senior Center. He was an outdoor enthusiast and loved horses. He was active in family businesses and supported all aspects of his children’s and grandchildren’s activities.

In addition to his wife, Edward is survived by seven children, Kathryn of Clinton, Brian and wife Dawn of Manchester, New Hampshire, Kevin of Wayland, Daniel and wife Cindy of Baltimore, Edward and wife Karen of Grafton, Alison of Worcester, and Erin and fiance Jim of Boston. He also leaves behind a brother, Robert O’Leary and wife Mhel of Ormond Beach, Florida; 17 grandchildren, Coretta, Mahalia, Lauren, Mollie, Sean, Owen, Elise, Timothy, Jennifer, Scott, Justine, Paige, Grace, Andrea, Gavin, Keagan and Sophia; and five great-grandchildren, Charlie, Callie, Gabriel, Alice and Edward. He is predeceased by a brother, Richard O’Leary and wife Debbie, and a grandson, Matthew. He also leaves behind many nieces, nephews, extended family, many longtime friends and antique car, truck and farm equipment enthusiasts.

Visitation will be held on Thursday, July 21, from 5-8 p.m. at the Chesmore Funeral Home of Hopkinton, 57 Hayden Rowe Street. A funeral Mass will be celebrated on Friday, July 22, at 10:30 a.m. at Saint John the Evangelist Church of Hopkinton. Burial will follow in Saint Mary’s Cemetery in Holliston. In lieu of flowers, donations may be made to gofundme.com/f/memorial-hockey-fund-in-memory-of-matt-oleary.