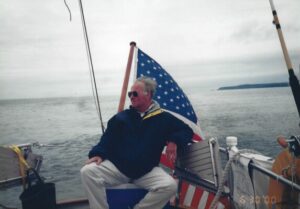 Edward D. Reardon Jr. died Feb. 5 with his wife and daughter by his side at Beth Israel Deaconess Medical Center in Boston at the age of 72.

Ted was born March 27, 1948 in Boston, and grew up in Natick. He graduated from Marian High School in 1966 and attended Quinsigamond College until he enlisted in the U.S. Navy in 1968. He proudly served his country for six years aboard the USS John S. McCain DD36 and USS J. A. Furer DEG6. After being honorably discharged from the Navy, Ted embarked on a 20-year career in sales management for Kidde Fenwal in Ashland. In 1994 he went into business for himself and owned Tiverton Auto Body Wholesale and Supply. In 1999 he joined Carney Management, where he worked with good friends until his retirement in 2014.

He was a dedicated and devoted father and husband whose love was evident in quality time spent together, lessons taught, memories made and stories told. He was most proud of his beautiful grandchildren and spent countless hours building Legos, reading stories and making their lunches all while they were tucked up beside him.

Aside from his family, Ted’s passion was sailing. What began in the U.S. Navy as service to his country became an enduring love of the ocean. He and “Cyn” owned multiple sailboats, his favorite being Governor’s Pub, which he sailed with family and friends every chance he got. His dream to make a transatlantic voyage came true in June 2000 when he joined lifelong friends on a 17-day journey from Jamestown, Rhode Island, to Kinsale, Ireland. He is pictured here sailing into Kinsale harbor on June 30, 2000. This is how we will remember him.

A Mass of Christian Burial will be held Thursday Feb. 11, at 9 a.m. in St. Cecilia’s Church, 54 Esty St.. Ashland, with a private burial to follow in the Massachusetts National Cemetery in Bourne. Calling hours will be held Wednesday from 4-7 p.m. in the Matarese Funeral Home, 325 Main St., Ashland. Please visit mataresefuneral.com for COVID-19 guidelines.