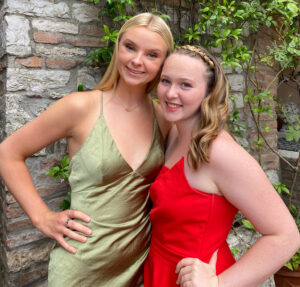 Hopkinton teenagers Kelsey Breslin (left) and Finley Doherty are members of Electric Youth, which will perform on the Town Common this Sunday.

When the teenage song-and-dance group Electric Youth hits the Town Common this Sunday (July 25) at 5 p.m. as part of the Parks & Rec Concerts on the Common series, there will be a couple of familiar faces on the stage.

Hopkinton teens Kelsey Breslin and Finley Doherty are members of the prestigious 14-person ensemble, whose shows consist of singing and dancing to pop songs and show tunes, with backing by the Boston Show Band. Electric Youth (EY) is coming off a four-week tour of Austria and Italy, where the group performed 14 shows.

While Doherty is completing her first season in the group, Breslin is a four-year veteran who graduated Hopkinton High School in the spring and is wrapping up her time with EY before heading to college.

Breslin started out starring on a different stage, as she was a basketball standout in her elementary and middle school years and expected to play at least through high school. But when the performing bug hit, her priorities changed.

“When I was younger I went to Enter Stage Left in Hopkinton and I would do one musical a year there,” she recalled. “But I was playing sports that entire time and I thought that’s what I wanted to do. I was so into basketball and so excited to play in high school. [For Enter Stage Left] you graduate after eighth grade and you can’t do the musicals anymore. And I remember being so upset and just missing it. So I went to my parents and was like, ‘I think I want to do theater more and I think I want to find a place where I can do it.’ It ended up working out, but I then had to make the decision to give up sports because the time commitment was so big.”

The daughter of two college basketball players — Jen (Saint Anselm) and Roger (Holy Cross) — Breslin was a little unsure how her parents would react. She was pleasantly surprised when they threw their support behind her new passion.

“The conversation went a lot better than I thought,” she said with a laugh. “I thought they were going to fall over when I was like, ‘I don’t want to play basketball.’ But they took it really, really well. They’ve always been so supportive. I think they appreciate theater, even though it’s so different from what they’ve always done. But they absolutely love coming to the shows, and they’re so fun. I’ve appreciated that they’ve been able to come on the tours. It’s so cool to have them there.”

Her father had heard about a program at the Franklin School for the Performing Arts and suggested she try it out. After attending summer camp there, Breslin was ready for more of a commitment. She auditioned for Electric Youth, which is based out of the school, and earned a spot despite concerns about her lack of dance experience.

“I did not feel confident going into the tryouts,” she recalled. “I had never danced before. Pretty much all we do is centered around dancing. I hadn’t taken a dance class, so I kind of went into it blindly. I played sports, so I wasn’t coordinated in any way. So I was definitely not confident.”

After being selected and joining the ensemble, Breslin put in additional work to master the moves being taught at the rehearsals.

“I spent a lot of extra time because I had never danced before, so I didn’t know what I was doing,” she said. “I needed to get to the level everyone else was — or at least try.”

That was four years ago. Now Breslin is heading into her final shows with the group before starting college at the University of Tampa, where she will study in the musical theater program. She plans to double major in Mandarin so she has a backup plan.

In the meantime, she is relishing the opportunity to perform a couple more times with her friends in EY. The group returned from Europe earlier this week, and it was a different experience than when Breslin and EY toured there four years ago.

“We went to the same places that we went my freshman year, but it was completely different with COVID,” she said. “It was a lot more normal than I anticipated, but even some of the shows they had to keep track of how many people were coming in and take people’s names down. It was a lot harder to draw a crowd at a lot of the shows, because people were kind of timid in getting out and being in groups.”

She said the highlight was a show in Menaggio, a resort town on Lake Como, at the foot of the Alps.

“It was the coolest thing,” Breslin said. “There were so many people there. It was a really, really big crowd, and they liked it.”