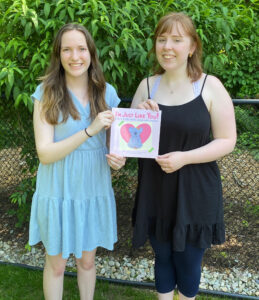 Friends Emma Burke (left) and Sadie Morgan combined their creative talents on a children’s book that increases awareness of epilepsy.

Lifelong Hopkinton residents Emma Burke and Sadie Morgan, friends since childhood, both were impacted by the effects of epilepsy. They decided to team up last summer to respectively write and illustrate a children’s book on the condition as part of Burke’s capstone project at Boston University.

“I’m Just Like You! Kali’s Story about Living with Epilepsy” is set in Australia. Published in September 2020, it depicts the life of Kali, a cheery 6-year-old koala from Australia with rosy cheeks and an orange bow in her hair. She describes her life of living with epilepsy in poetic fashion, explaining the condition and encouraging others to accept her for who she is.

Burke, who has epilepsy, recently graduated with a degree in health science from Boston University with a minor in Spanish. She expects to receive her master’s next year.

“When I was in high school, I started having some seizures,” she explained. “But I have vocal impaired awareness epilepsy, so we weren’t really sure that they were seizures. I kind of thought I was zoning out or something like that.”

There are more than 40 different types of epilepsy, a neurological condition that affects the central nervous system. According to Epilepsy Foundation New England’s website, there are 3.4 million people in the United States with epilepsy, and 1 in 26 will develop the condition at some point in life.

“I was actually diagnosed with epilepsy on my first day of college,” Burke said. “I had MRIs [magnetic resonance imaging] and EEGs [electroencephalograms]. It was not the best time in my life to be diagnosed, but I received the diagnosis at a Boston hospital near BU, so I could just walk there.”

Although the diagnosis was challenging for her, “In some ways it wasn’t,” she said. Her doctor was very supportive, encouraging her that she “could pursue a quote-unquote normal life even though I have epilepsy.”

“When I have seizures, I get really tired. That can be frustrating,” Burke said, noting that managing medications is important. “Not being able to drive a car and losing a sense of independence were frustrating. I go through phases when I can drive and when I can’t.”

In Massachusetts, a person must be seizure-free for six consecutive months in order to drive, according to the Massachusetts Medical Society handbook.

Burke noted that the past few years have been about coming to terms with the condition and making the public aware of what epilepsy is and what a person can do to assist someone having a seizure.

Burke said her children’s book was an opportunity to engage children and adults in the discussion of the disability as well as a means to come to terms personally with the illness. It also served as her final project for the honors program. Originally, she had planned to study mental health in different communities in Alaska, but the pandemic changed her course.

“My grandmother was an English teacher, and reading was always really important to me,” she said.

“Often children are told that there is something wrong with their brains, but they aren’t really told about the specifics of epilepsy,” she continued. “I wanted to explain it in a child-friendly way that would help de-stigmatize it.”

Burke credited her sister for coming up with the Australia theme. The book comes with a boomerang cutout. Karen Jacobs, a BU professor who coauthored the book with Burke, had contacts in Australia who provided the cultural context. Kali’s neurologist is a kangaroo named Dr. Sue.

Morgan, a student at Massachusetts College of Art and Design, is studying jewelry-making and film. But she described illustration as a lifelong passion that she was proud to utilize in this project.

“I’ve known Emma since first grade,” Morgan said. “So I think it was just kind of natural for her to reach out to me. I was really excited to take part in this because it’s every artist’s dream to illustrate a children’s book.”

Morgan noted that while she doesn’t have epilepsy, she knows people close to her who do, including Burke. This made the project even more meaningful to her.

Morgan added that the pandemic actually helped with her creative process because she was able to spend time at home and focus on digital art.

“Sadie was the first person I thought of for this project because she is so talented,” Burke added. “And we have both been affected by epilepsy in our own ways, which made it even more meaningful.”

It took about three months to write the book, and then some time last fall doing the editing. Morgan spent most of last summer working on the illustrations and collaborating on Zoom.

“Sadie and I would meet up in Hopkinton State Park occasionally to discuss the book and catch up,” Burke said.

The biggest message she wanted to teach people is that someone with epilepsy can do pretty much everything anyone else can do.

“Epilepsy is definitely an obstacle in people’s lives,” Burke said. “It’s important to understand the differences. But those differences don’t define a person with epilepsy.”

Morgan added that anyone affected by a disability can relate to this book.

There are two copies of the book in the Hopkinton Public Library, and the Marathon School has requested some. It was difficult to distribute the book more widely before the COVID-19 restrictions were lifted because of the fear of spreading the virus, Morgan said. The book also is available via Amazon.

Burke noted that the book is a teaching tool for both children and adults to facilitate discussions.

Morgan said she has discussed collaborating with Burke, perhaps on a sequel.

“We’ve definitely considered this and talked about it,” Burke said.