Girl Scout works to make sure Hopkinton residents are ready 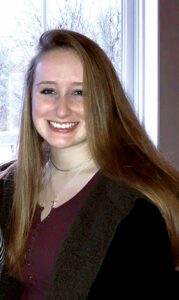 Participating in her church’s mission trip to Houston in July 2018 following Hurricane Harvey the previous year, Catharine Barry saw firsthand what type of damage natural disasters can cause.

Barry then wondered if the Hopkinton community would be properly prepared if a natural disaster were to occur.

Now, using her experiences for her project to earn the Gold Award, the highest award given in the Girl Scouts, Barry is raising awareness for emergency preparedness.

The Gold Award is the culmination of getting the required prerequisites and training to be eligible, requiring both the Bronze Award and Silver Award, and being a high school student. The purpose of the Gold Award project is for the Girl Scout to identify a civic issue she finds important, create a team of mentors who will support her research, and identify problems and find solutions.

What makes the Gold Award especially challenging is that the Girl Scout works on her own, doing research and finding mentors, as opposed to the bronze and silver projects where people work in groups.

What Barry learned doing her research is that communication with the public is critical during emergencies.

“It’s important that residents know where to get information, programs like Code Red, letting residents know what they should do during emergencies,” she said. “Residents should make sure they’re registered on their landline or even their cell phone.”

Code Red is an emergency notification system that allows public officials to quickly notify and inform residents if an emergency were to occur. Individuals must register their phone number to receive notifications, which can be done via Hopkinton government website. Individuals also are encouraged to sign up for email notifications and download the CodeRed Mobile Alert app onto their smartphone.

For her mentors, Barry reached out to public officials throughout the area who provided valuable information and insight. Her adviser was Jane Moran, a former police chief of Southborough who served 32 years in the town’s police department. Her Girl Scout adviser was Sue Kohlman, who helped in the planning of her project. She talked to Hopkinton Fire Chief Steve Slaman, Hopkinton Police Lieutenant John Porter and Josh Grosseti, who is the director of technology for the town.

During her research, Barry found that residents didn’t realize all the programs and precautions that should be utilized.

“We sometimes forget that it can happen to us because it’s not as common,” Barry said. “It’s not that they didn’t know, it was more of a reminder that people should be prepared.”

Part of her project was creating an informational flier for Hopkinton residents. The HEAR (Hopkinton Emergency Awareness and Readiness) brochure alerts residents what to do in preparation for an emergency or during one. Included are tips such as creating an emergency kit, developing an emergency contact list and checking on elderly neighbors or those who live alone to see if they need help.

Barry first started in the Girl Scouts when her parents signed her up in kindergarten. She credits her troop leaders, who helped and encouraged her through her time in the organization, especially during the Bronze Award and Silver Award projects that she completed in middle school. For her Bronze Award she taught younger Girl Scouts about climate change, and for her Silver Award she organized CPR classes in Hopkinton that are still available.

With her final proposal submitted, her project will conclude with a presentation to the Girl Scouts of Eastern Massachusetts near the end of June. Following her completion of the Gold Award, she plans to become a Girl Scout ambassador, serving as a mentor for Girl Scouts working on their civic engagement activities and award projects.