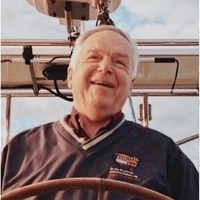 He was born on May 13, 1947, in Greenwich, Connecticut, to Robert Edward Nickerson and Mary Jane Caldwell Nickerson. Eric predeceases his mother, a resident of Candler, North Carolina. Eric is survived by his wife, Marie Labrie Nickerson; his children, Lisa Nickerson and her former husband, Mark McGonagle ,and their three children, and her partner, Robert Cramer, of Wayland; Robert Eric Nickerson and his wife, Lori Nickerson, and their three children of Hopkinton; his former wife and mother of Lisa and Rob, Jane Vance Nickerson of Natick; stepson Nathan Neveu and his wife, Jennifer Kilday Neveu, and their two children of Nashua, New Hampshire; his sister, Jan Nickerson, and husband, John Graham, of Candler, North Carolina, and their children, Jamie Gay and Jenna Graham; his former sister-in-law, Arlene Benedict Nickerson of Stamford, Connecticut; his nephew, Dillon Bowman; and many cousins, including Mary Schempp-Berg and her husband, David Berg, of Whangarei, New Zealand. Eric was predeceased by his father as well as his brother, Robert Tek Nickerson.

Eric grew up in Old Greenwich, Connecticut, and attended the college preparatory Holderness School in Holderness, New Hampshire. He attended Worcester Polytechnic Institute, where he received his Bachelor of Science in mechanical engineering and control theory. He was a member of the Phi Gamma Delta fraternity, commonly known as Fiji. Eric later graduated from the University of Rhode Island’s College of Business with his Master of Business Administration. Eric maintained many close friends from his fraternity and recently attended the 50th reunion in Newport, Rhode Island.

Early in Eric’s career he worked at Burndy Corporation and Texas Instruments. In 1978 Eric joined Teradyne Connection Systems in Nashua, New Hampshire, where he worked for 27 years before leaving his role as the global account manager for contract manufacturing. After leaving Teradyne, Eric worked with Harting and Navico. Eric also enjoyed his time counseling small businesses as a certified mentor for SCORE, and his work as a UNH marine docent.

Eric, known for his strong work ethic, always found ways to be productive. He loved projects, working around his house, and finding ways to make things better or more efficient. His children will often reference “not being caught sitting” as kids because if Dad came around, you would quickly find yourself mowing the lawn or doing various chores around the house!

When Eric wasn’t working, he was most often hot-air ballooning. His beautiful, multicolored balloon would often be seen in the skies of southern New Hampshire during early morning or early evening flights. Eric would also participate in many balloon rallies, from the Milford (New Hampshire) High Hopes fundraising rally that welcomed thousands of people from far and wide, to the “Balloons over Letchworth” in Castile, New York, which was his favorite rally of them all. An avid sailor, Eric found ballooning “the closest thing to sailing.” A lover of New England’s coast, when Eric could get on the water you would find him on the Windjammer Angelique, his favorite sailboat for cruising the coast and taking in New England’s majestic lighthouses. He also loved that his wife, Marie, was the steward of Celia Thaxter’s Garden on Appledore Island, Isles of Shoals. Appledore is home to the Shoals Marine Laboratory, which is operated jointly by Cornell University and the University of New Hampshire. Eric felt at home on the island and often volunteered for various projects.
Always curious and ready for an adventure, Eric traveled far and wide with his friends and family. From Antarctica to Australia and New Zealand, to weeks-long sailing trips with his cousin Mary and her husband, Dave, and, of course, hot-air balloon rallies across the country. Whether it was skydiving or bungee jumping, he was always on a mission to experience something unique and special.

Eric’s final flight takes him to a place where he will be reunited with family and friends. He will certainly continue socializing, laughing and figuring out how to fix something or make it better. If only we could hear Eric sharing stories of iPhones and WiFi with his grandfather, Orestes H. Caldwell, who notably coined the word “electronics.” Dr. Caldwell was a passionate fan of electronic gadgets, one of the first five members of the U.S. Federal Radio Commission, a pioneer in commercial radio, and a significant influence in Eric’s fascination with technology.

The family will host a private service when the opportunity for travel permits.
Gifts in Mr. Nickerson’s memory can be made to the Shoals Marine Laboratory, as a memorial gift to Worcester Polytechnic Institute, or in support of Dr. Adam Bass’ Research Fund at Dana-Farber Cancer Institute.

Arrangements are being handled by Michaud Funeral Home & Crematorium in Wilton, New Hampshire.