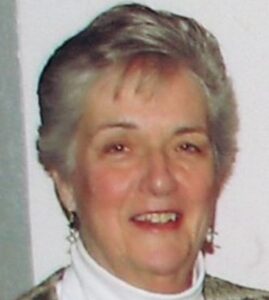 Esther Charlotte (Smith) McLellan, age 81, passed away peacefully on Oct. 15 at Whitney Place in Sharon, surrounded by love. Born in North Stratford, New Hampshire, on April 28, 1940, she was the daughter of the late Selma K. (Keenan) Smith. She was raised surrounded by her extended family in Berlin, New Hampshire. Esther graduated from Saint Joseph’s Academy in Portland, Maine, with the Class of 1958 and went on to graduate from Catherine Laboure School of Nursing with the Class of 1960. Upon graduation, Esther accepted a position in the operating room at Carney Hospital in Boston.

Esther married her beloved husband, Paul E. McLellan, on Feb. 24, 1962. The young couple made their home together in Quincy before settling in Natick. In 1976, Esther and Paul made their home in Hopkinton, where she returned to nursing in the Hopkinton Public School system and then at Marian High School in Framingham. Esther officially entered retirement in 2003, but anyone who knew her knows that she never retired from nursing. After settling into her new community at Cookingham Greene in Ashland, Esther continued volunteering with both the Hopkinton and Ashland boards of health for town-sponsored flu clinics, blood pressure checks and other activities.

She was the beloved wife of the late Paul E. McLellan, who passed away suddenly in 1994, and the loving mother of Katharine E. McLellan of Germantown, Maryland, Donna M. McLellan of Weymouth, and Helenanne Hughes and husband Sean of Walpole. She was the cherished grandmother of Christopher of New Haven, Connecticut, and Alexander, Catriona, Shane and Jonathan, all of Walpole. She was the sister of the late Hon. Peter Smith and his late wife, Betty (Buffi).

She also is survived by dear family friend Joseph Brooks and his wife, Sandy, of Braintree and their son, Michael Brooks of Boston, as well as her loving sisters-in-law and their families, nieces, nephews and cousins.

Relatives and friends are kindly invited to attend Esther’s visitation on Friday, Oct. 22, from 4-7 p.m. in the James H. Delaney & Son Funeral Home, 48 Common Street, Walpole. All are welcome to gather at the funeral home on Saturday, Oct. 23, at 9 a.m. prior to the Mass of Christian Burial that will be celebrated in Our Lady of Sorrows Church, 59 Cottage Street, Sharon, at 10 a.m. Interment will take place privately at the Lakeview Cemetery in Freedom, New Hampshire.

In lieu of flowers, memorial donations may be made to Old Colony Hospice, 321 Manley Street, West Bridgewater, MA 02379.