Davin Evans was thrilled to find out he had been named one of the Hopkinton High School wrestling team’s captains. It wasn’t too long ago when he wondered whether he would even be able to wrestle at all.

Evans, now a senior with the Hillers, started wrestling in the eighth grade and immediately took to the sport. He joined the Hopkinton program as a freshman and competed in the same weight class as his best friend, Christian MacDonald. During a meet against Concord-Carlisle, Evans’ season took a turn. Locked in a close match, his opponent lifted him up and Evans landed on his head.

“I just went black for a couple of seconds,” he said. “I didn’t know what happened, then I let him pin me because I was in some discomfort and my head was hurting.”

Concussions are always serious, but for Evans it was potentially career-ending. Evans has Sturge-Weber syndrome, a disorder that impacts the neurological system. After the concussion he was out of school for two weeks, taking medicine that had him sleeping for 12 hours or more at a time. 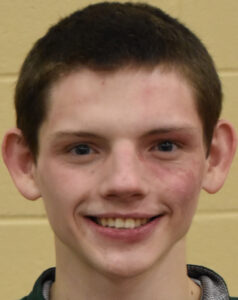 Everyone, from his doctor to his neurologist to his mother, told him he might not be able to wrestle again.

“That was really crazy for me,” he said. “It was heartbreaking because I had enjoyed it so much.”

Evans went out for the indoor track team his sophomore year, but his heart was on the mat. He managed the wrestling team, often racing over to wrestling practice after he had finished his track workout. He kept learning the sport, encouraging his teammates and doing whatever he could to be a part of the program.

After a series of MRIs and no further complications, Evans learned before his junior year that he might be able to return to wrestling. A final test at Boston Children’s Hospital confirmed it. His doctor was clear that another head injury could have long-term consequences, but Evans said he wanted the chance to finish his career on his terms.

Evans split time between the JV and varsity teams last winter, earning a varsity letter and winning the Coaches’ Award for being a good teammate and a hard worker. He went to an offseason wrestling camp to try to make up for the time he missed and said he genuinely enjoys practice and “the grind” of trying to become a better athlete.

Earlier this fall, he was named one of the Hillers’ captains, along with his best friend MacDonald. Working under coaches Tim Nelson and Corey Mills, Evans is off to a strong start to his senior season wrestling at 126 pounds, including a pair of wins at the prestigious Lowell Holiday Tournament.

“I couldn’t ask for better coaches,” he said. “Everything I kind of dreamt of with wrestling is coming true.”

And Evans is focused on his future. He said if he gets another concussion, he won’t hide it, there’s too much at stake. He’s already been accepted to the University of New Hampshire and is considering several other college options. Until then, he’s going to continue his improbable high school wrestling career.

“I went from not being able to wrestle to being a captain,” Evans said. “It showed that my hard work paid off.”