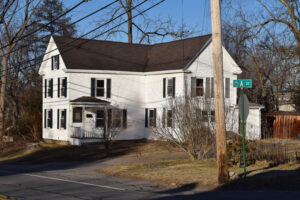 The Board of Appeals denied a special permit that would have allowed this house at 18 Cedar St. to be transformed into an eight-unit residential structure. PHOTO/JERRY SPAR

At the conclusion of a public hearing held on Jan. 9, the Board of Appeals voted unanimously to deny a special permit that would have moved forward the construction of a multi-unit structure on Cedar Street.

The applicant, Janice Brown, was seeking the special permit in order to construct an eight-unit residential structure located at 18 Cedar St., which is set in the downtown business district. Currently, a single-family home sits vacant on the 12,000 square foot lot, which Brown owns and desired to covert to the new structure.

The initial hearing took place in September but, at the request of the applicant and her legal team from Nealon & Nealon, was continued until Jan. 9 in order to revise the plans for review by the board. According to the application, each unit would contain one bedroom, one bathroom and total approximately 600 square feet. Brown said the intention was to rent out the units at “market value,” which she deemed approximately $1,000 per month.

Plans showed the front of the building would reflect the character of the neighborhood and appear as a large colonial home with 14 parking spaces for residents as well as new landscaping.

A number of residents from the neighborhood showed up at the hearing to voice their concerns over the new construction project. Alice Carroll, who resides on A Street, told the board she had a number of issues with the multi-family dwelling, including how close it comes to her property line, her privacy, and the additional traffic it would bring to the neighborhood.

“It’s going to be a nightmare for A Street residents with so many additional cars pulling in and out,” Carroll explained to the board.

Nancy Stevenson of Hayden Rowe said if the project was approved, she was concerned about the visual effects it and future projects could have to the town.

“It sets a precedence,” she said.

After the public hearing closed, the Board of Appeals openly discussed and ultimately felt the project was too big for the lot size and would therefore have a negative effect to the Cedar Street area.

“The applicant did a good job of trying to aesthetically fit the building into the neighborhood, but it’s really a big building” said Chair Mark Hyman. “This is an incredibly small lot. As it’s proposed, it’s too big and will be detrimental to the neighborhood.”

Brown appeared before the Planning Board on Jan. 14 and officially withdrew her application, although she indicated she plans to work with neighbors and come up with a new plan for the property.

“I’m withdrawing my request, but I’ll be back at some point, perhaps,” Brown said.