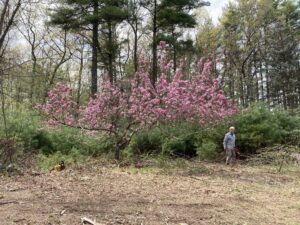 Two years ago, Ed Harrow came across a patch of Hopkinton that was so overgrown with invasive plants, he could hardly walk through the undergrowth.

Now, the chair of the Hopkinton Open Space Preservation Commission is on the third round of grant-funded clearing.

“Basically a glorified mowing job,” Harrow said about the mechanical and by-hand removal of plants. Even as a last resort, herbicide is not an option under Hopkinton’s edict, so he pulls and cuts the Oriental bittersweet, Japanese knotweed and Japanese barberry that overwhelm the landscape.

“I’ve pulled roots that are at least 15 feet long,” Wayne Mezitt said. Mezitt, in addition to being the owner of Weston Nurseries, is chair of the Massachusetts Invasive Plant Advisory Group, and he said the bittersweet’s orange roots are pervasive. But the branches are what climb and choke out trees in their competition for sunlight.

“I’ve sort of given up on pulling except for the small plants,” said Mezitt. “And I’ve gone to cutting them off.”

He said getting to bittersweet before it flowers can stop its seed from spreading. Both men said the bittersweet, and its red berries that appear in the fall, will crawl up anything it can find.

Knotweed, on the other hand, is a leafy shrub that Mezitt said prefers to grow in broken or disturbed ground.

Mezitt said Japanese knotweed, along with a few other invasive species, was introduced in the 1930s by the United States Department of Agriculture (USDA). After the Dust Bowl, the USDA sought to stabilize eroding lands through soil conservation nurseries. Yet, some plants had a different origin story.

Japanese barberry always was a major product in the nursery industry, said Mezitt, because it’s an effective hedging plant. Its dense growth and beautiful color make it a popular perimeter. The thorns deter human and animal trespassers — but because the deer won’t touch it, and it grows so easily, it’s difficult to control.

But the incorrigible growth of bittersweet, knotweed and barberry can be a danger to native species.

“Most of them have a tendency to gravitate into native areas and dominate certain areas, sometimes to the exclusion of desirable plants,” said Mezitt. “In fact, frequently, that way.”

He said the invasive species often don’t have “natural controls” like pathogens, insects, diseases and animals.

“The thing that’s most needed is more public awareness and funding,” said Mezitt. Funding often comes from private groups and individuals, but Mezitt said without pressure from the public, he doesn’t believe the government will spend to cut down the invasive growth.

But many don’t understand the impact of bittersweet’s bright red berries.

“Well, it’s too late for my mother, but she thought bittersweet that was growing up on the side of my parents’ barn was lovely,” Harrow joked. “And my father would sneak out when she wasn’t looking and cut it off at the base. And this went on for some number of years.”

Bittersweet berries, said Harrow, can be quite charming. But he adds, at some point, it climbs the tree and pulls it down to the ground.